Saleh al-Arouri is a top Hamas official who plotted the kidnapping and murder of three Israeli teens in 2014 and the murder of a rabbi and his wife in 2015. 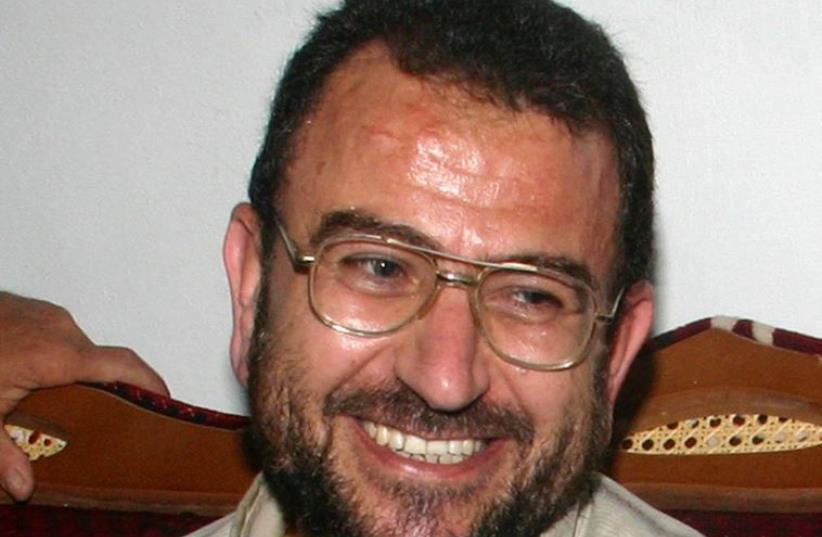 Hamas leader Saleh al-Arouri
(photo credit: JAMAL ARURI / AFP)
Advertisement
An Israeli NGO demanded that Interpol take “all necessary steps to arrest Hamas leader and terrorist Saleh al-Arouri for his role in two infamous crimes against Israelis.”The two terrorist attacks were the kidnapping and murder of three teenagers near Hebron in 2014, and the shooting murder of a rabbi and his wife near Nablus in 2015.Shurat Hadin – Israel Law Center sent the demand letter to Interpol on Thursday, one day after the international organization’s decision to accept the “State of Palestine” as a member. Israel had fought a hard diplomatic fight to block the Palestinians getting membership.Arouri is a member of Hamas’s politburo and, according to Shurat Hadin, is known to direct terrorist attacks carried out by Hamas’s Izzadin Kassam Brigades in Israel from abroad.Shurat Hadin president Nitsana Darshan-Leitner represents the family of Naftali Fraenkel, a dual-US/Israeli citizen who, along with two other boys, Eyal Yifrah and Gil-Ad Shaer, was kidnapped and murdered in a terrorist attack carried out on June 12, 2014.The attack was orchestrated by Arouri when he was residing in Turkey.In addition, Shurat Hadin said that Arouri planned the murder of Rabbi Eitam and Na’ama Henkin when they were driving their car home with their children on October 1, 2015.The NGO pointed out that in September 2015, the US designated Arouri as a “Specially Designated Global Terrorist” (“SDGT”), specifically identifying him as “a key financier and financial facilitator for Hamas military cells planning attacks,” and noting that he “directed and financed Hamas military cells in the West Bank.”Arouri was given sanctuary by Turkey for many years, and it was from Turkey that Arouri directed the terrorist attacks that killed Fraenkel, Yifrah, Sha’ar and the Henkin couple. Shurat Hadin said that Arouri reportedly later left Turkey for Qatar, and is currently thought to be residing in Lebanon.Darshan-Leitner explained: “Due to the international nature of this matter and Arouri’s movement between various jurisdictions with varying levels of relations with Israel, Interpol’s assistance in obtaining the arrest and trial of Arouri for his involvement in these murders is essential.”