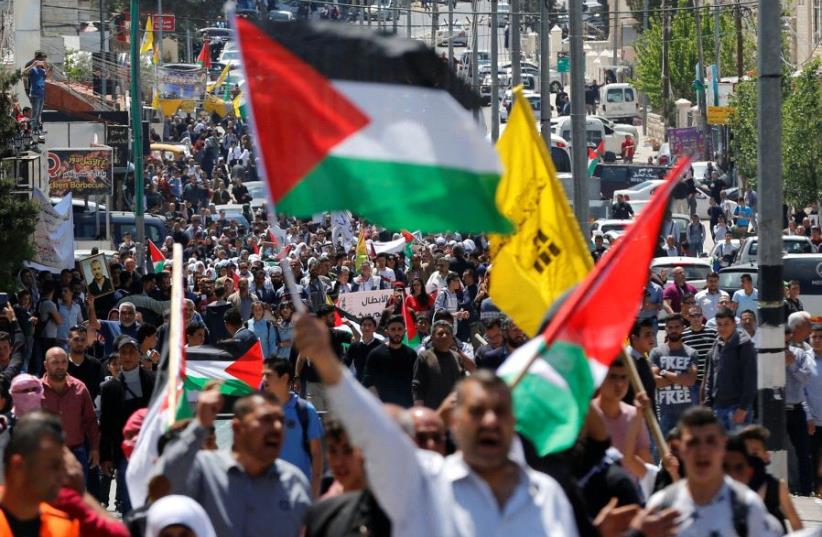 Palestinians take part in a protest in solidarity with Palestinian prisoners held by Israel, in the West Bank town of Bethlehem April 17, 2017
(photo credit: REUTERS/AMMAR AWAD)
Advertisement
An NGO demanded on Wednesday that the Attorney- General’s Office order the Prisons Service to reinstate visiting privileges for hunger- striking Palestinian prisoners to receive their lawyers.Adalah – The Legal Center for Arab Minority Rights in Israel wrote in a letter to Solicitor- General Osnat Mendel that since the hunger strike started on April 17, the prisoners’ lawyers’ requests to visits their clients have been systematically blocked, either formally or by a string of seemingly planned logistical “oversights.”
Palestinians hold rallies as hundreds of prisoners in Israeli jails begin a hunger strike (credit: REUTERS)
On April 17, 1,500 Palestinian security prisoners started a hunger strike to protest what they called inhumane treatment and restrictions, including denial of the right to use the prison telephones, as well as the justice system’s treatment of them in general.Adalah stated that even where lawyers have followed all proper procedures and obtained Prisons Service approvals for their visits in advance, upon their arrival to a prison to visit their clients, Prisons Service personnel have blocked them from visiting, essentially to punish the hunger strikers.It said that such a punitive policy is illegal.Further, Adalah said that “the job of lawyers is to defend the rights of the prisoners, and therefore, preventing meetings takes away from the prisoners the guarantors who defend their constitutional rights, including defense of their bodies, the right to dignity and access to judicial oversight.”While the hunger strikers and most Palestinians view the hunger strike as a nonviolent protest highlighting Israeli violations of human rights, many Israelis view it as a stunt to reignite the currently quieter “knife intifada.”Adalah said in its letter that legal representation is all the more critical during a hunger strike, which exposes prisoners to significant health-related dangers and harsh sanctions by the Prisons Service.The NGO added that in the past, the Prisons Service has admitted that any blanket prohibition on meeting with lawyers is illegal and has declared instances where it occurred to be mistakes.Finally, Adalah threatened to file a petition with the High Court of Justice if the Attorney- General’s Office did not immediately address the issue.Meanwhile, representatives of the International Committee of the Red Cross on Wednesday met with hunger- striking prisoners in Nafha Prison, 20 km. north of Mitzpe Ramon in the Negev.“We went to the prison to monitor detainees’ health and collect oral messages for their families,” ICRC spokesman Jesus Serrano Redondo said.Redondo said the ICRC does not speak to the media about the treatment of prisoners or conditions in prisons.The ICRC usually meets with hunger-striking prisoners 14 days into their strikes, but decided to visit them earlier this time because of the large numbers of prisoners involved.PLO Commission for Prisoners Chairman Essa Qaraqaa said on Wednesday that the number of hunger-strikers had increased to 1,800. According to the Prisons Service, many fewer prisoners are involved.