In the meeting, Nicaragua's foreign minister made clear Managua's backing for Palestinian statehood and full membership in the United Nations. 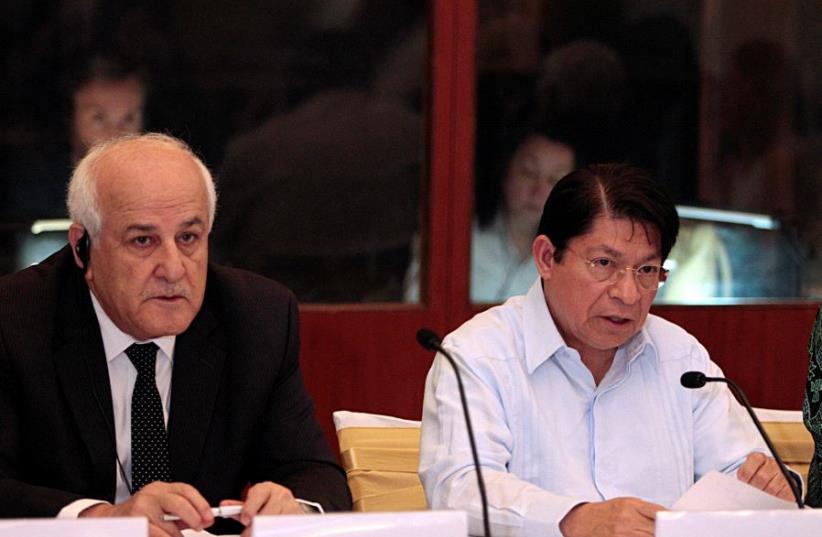 Nicaragua's Foreign Minister Denis Moncada (R) speaks while flanked by the Permanent Observer of Palestine to the United Nations (UN), Riyad Mansour during a meeting with members of the Committee for the Exercise of the Inalienable Rights of the Palestinian People in Managua, Nicaragua February 4, 2
(photo credit: REUTERS)
Advertisement
As a new world order continues to coalesce, Nicaragua's foreign minister came out Saturday to assert the Central American country's stance in what is the world's oldest impasse - the Israeli-Palestinian conflict. The comments came at a roundtable in Managua hosted by the United Nations Palestinian Rights Committee for the diaspora in the region.The proceedings were hosted by Nicaragua's foreign minister, Denis Moncada.Speaking on behalf of Nicaragua's leftist Sandinista government led by Daniel Ortega, a one-time ally of the late Palestinian leader Yasser Arafat, Moncada underscored solidarity with Palestinians."It's fair and necessary to put an end to the Israeli occupation in Palestinian territories. We are demanding the immediate halt in the construction of settlements. An end to the blockade of Gaza and the liberation of Palestinian prisoners," he said.In the meeting, Moncada made clear Nicaragua's backing for Palestinian statehood and full membership in the United Nations."Impunity for the government of Israel is unacceptable, and with the abuse of the veto of the (United Nations) security council that prolongs the fulfillment of the Palestinian people and the occupied territory and the more than five million Palestinian refugees in the world, to them we expressed our solidarity," Moncada said.Before a summit between Latin American and Arab countries five years ago, much of region recognized the Palestinian state.