'Not my place to tell Palestinians how to resist Israel,' Arab MK says

Ayman Odeh, the chairman of the predominantly Arab Joint List faction, told Al Arabiya television on Friday that "a popular intifada is most beneficial for the Palestinians." 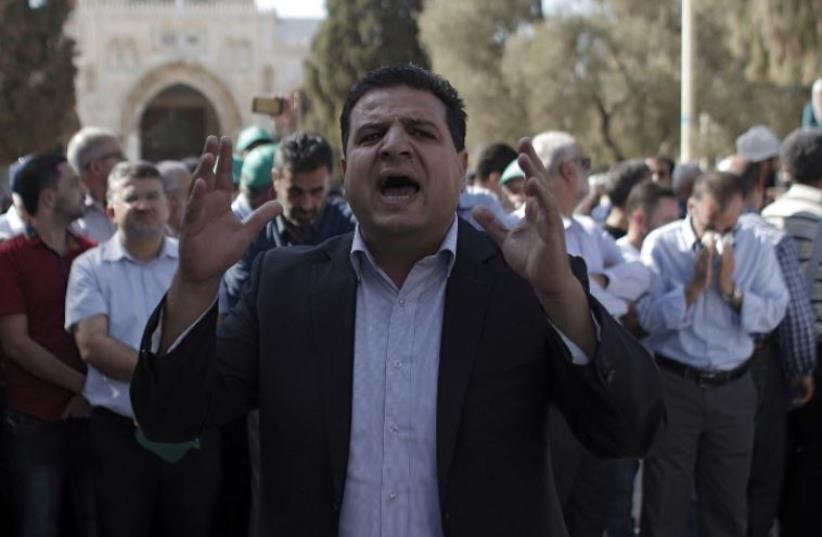 Joint List head Ayman Odeh shouts slogans near the Dome of the Rock in Jerusalem
(photo credit: AFP PHOTO)
Advertisement
The most senior Arab lawmaker in the Knesset told a Saudi-owned satellite television station on Friday that "it's not my place to tell the Palestinian people how they should resist" Israel.Ayman Odeh, the chairman of the predominantly Arab Joint List faction, told Al Arabiya television on Friday that "a popular intifada is most beneficial for the Palestinians."The Haifa-born parliamentarian refused to condemn the recent wave of stabbings, car rammings, and shootings that have claimed the lives of dozens of Israeli soldiers and civilians in recent months.Odeh told Al Arabiya that "we must examine our history and the history of other nations in order to decide upon a strategy.""There's no doubt that the popular, grassroots intifada is the most beneficial for the Palestinian people, but I don't think it's my place to tell the people how to resist," he said.Zionist lawmakers in the Knesset were furious with their Arab colleagues for their refusal to forcefully denounce Palestinian violence.Knesset members supported President Reuven Rivlin’s decision to disinvite MK Jamal Zahalka from a meeting at the President’s Residence last week.MK Shelly Yacimovich (Zionist Union), a longtime Rivlin supporter, called the president’s decision “a precise civics lesson” to disinvite Zahalka and two other Joint List MKs after they met with the families of slain terrorists and stood in silence to honor their memories.She said Rivlin was “wise and courageous” to oppose a law to suspend MKs, but at the same time, close his door to those whose “behavior he finds disgusting.”“With the characteristics that are so missing in today’s leadership, delicately, statesmanlike and assertively, he set the limits of Israeli democracy: I will not pass a law against you, but you are not wanted in our official school of statesmanship,” she wrote on Facebook. “It is so rare, but fun, that there is someone like the president who can, sometimes, be looked at, learned from, serve as inspiration, whose decisions can be relied on.”The president’s office confirmed that an invitation had been sent on January 25 before Zahalka and two other Joint List MKs met with the families of slain terrorists. Wednesday’s meeting featured Arab regional council heads and Arab MKs, and officials from the Prime Minister’s Office, the Finance Ministry and the Social Equality Ministry.Among the lawmakers who in the aftermath supported Rivlin’s decision, MK Yoav Kisch (Likud) wrote: “It’s good that [Rivlin] met with the Arab local authority heads, and it is good that he prevented MK Zahalka from participating in the meeting.“Whoever wants to live here equally in a Jewish and democratic state must will be respected and appreciated. Whoever incites and supports terrorism will find himself outside,” Kisch said.The Joint List lawmaker said he had been invited to the event several weeks earlier and said he could not attend, but then changed his mind in recent days and notified the President’s Residence.“I was told that the chairs at the event were full and there is no room. In response, all the heads of the Joint List canceled their participation,” Zahalka said. “I didn’t know the President’s Residence was missing chairs, and we should seriously consider expanding its budget to buy more chairs.”The Balad leader waited till the day prior to the event to confirm his attendance and was given to understand in the most tactful of terms that he would not be welcome. Odeh was listed among the speakers and, even on the day of the event, it was not known if he would attend. But like other members of the Joint List, he boycotted the meeting, which had been called to celebrate a turning point in the economic development and multi-faceted improvement in the quality of life of the Arab sector.Two Arab MKs who did attend were Zouheir Bahloul (Zionist Union) and Esawi Frej (Meretz). Greer Fay Cashman and Lahav Harkov contributed to this report.