Yuval Diskin made the remarks during an appearance on Channel 2's weekly Friday night news magazine. 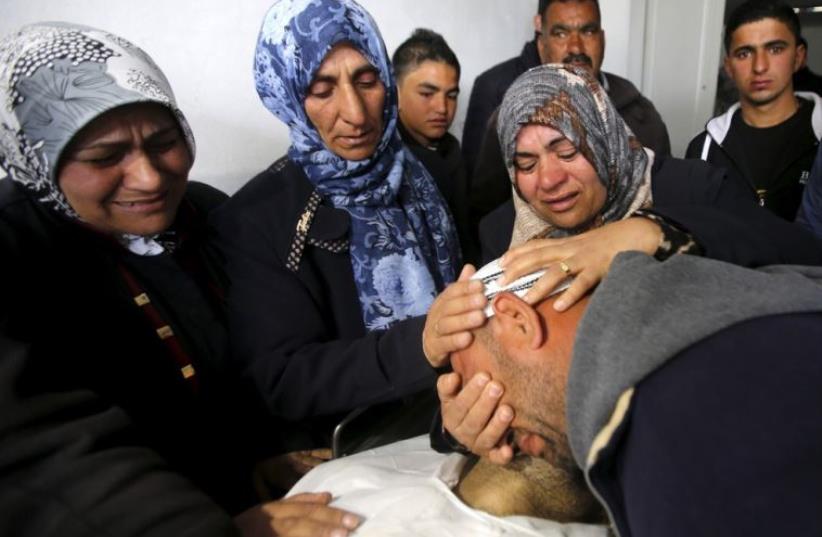 The brother and the mother (C) of Palestinian Qasim Jaber, 31, who the Israeli military said was shot dead by the Israeli army after he carried out an attack on Israelis, mourn as they look at his body in Hebron
(photo credit: REUTERS)
Advertisement
Yuval Diskin, the former head of the Israel Security Agency (Shin Bet), slammed the governing coalition of Prime Minister Benjamin Netanyahu on Friday for failing to provide "hope" for "frustrated, embittered" Palestinians who are compelled to commit terrorist attacks.Diskin made the remarks during an appearance on Channel 2's weekly Friday night news magazine.Since his tenure as Shin Bet director ended, Diskin has been one of the more vocal critics of Netanyahu and his policies. "What's happening on the ground at the moment is not surprising," he told Channel 2. "For years, I've taken notice of these developments that are only widening and gaining momentum, including the fact that there are hundreds of thousands of frustrated, embittered, and incited young people on the Palestinian side."Diskin said that the government's failure to "change the atmosphere" on the diplomatic level as it relates to relations with the Palestinian Authority was a key factor in the violence."This current wave of terrorism needs to be dealt with using operational means as they are being implemented under the leadership of the army chief of staff [Gadi Eisenkot] and the Defense Minister [Moshe Ya'alon]," Diskin said."However, there's another part of it that isn't on the operational side, and that is a change in atmosphere," he said. "In order to change the atmosphere that creates this wave of terrorism, there needs to be moves made that generate hope."Diskin has gone on record as stating what he thinks is necessary in order to resolve the Zionist-Arab conflict: the establishment of a demilitarized Palestinian state along the 1967 lines with territorial swaps that will allow Israel to keep large settlement blocs; a symbolic right of return for refugees, with financial compensation being paid to Palestinians in the diaspora; dismantling of settlements that are beyond the agreed-upon borders and compensation to those who will be evicted from them; a political partition of Jerusalem which would be in line with our interest to avoid ruling over a large Palestinian population; a creative solution regarding sovereignty over the holy sites in the Old City; a resolution of the future status of the Temple Mount and the Western Wall; and a diplomatic solution over the contours of Israel’s eastern border and the Jordan Valley.