Yet again, Israel seems to have disappeared from a map of the Mideast in an online publication's illustration. 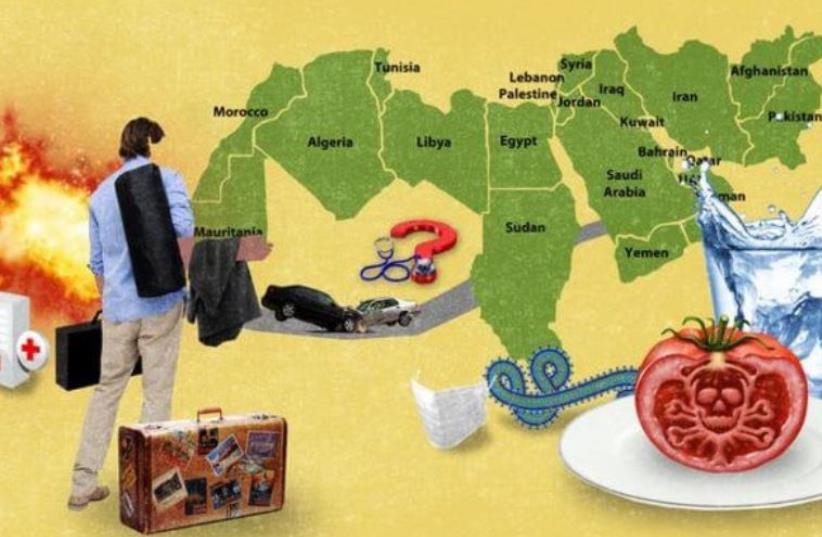 Map from NPR depicting mideast with Israel missing.
(photo credit: screenshot)
Advertisement
In an article published on National Public Radio's (NPR) website Monday, a map of the Middle East failed to include Israel, labeling Palestine in its place. The map was an illustration accompanying the article "What Are You Afraid Of In 2016? Globetrotters Share Their Fears." The article referenced travelers' fears of Islamic radicalization and extremism in the region.Immediately following the publication, the website's comment section was flooded with criticism from readers and journalists who questioned the online publication's decision to use an illustration of this nature.  NGO HonestReporting first reported on NPR's use of the map and spearheaded efforts to get it removed.As a result of the abundance of complaints, NPR removed the photo and issued an apology stating, " The map had a number of errors. The countries of Cyprus, Israel and Turkey were either not shown or not labeled; the label for "Palestine" should have read "Palestinian territories"; and Afghanistan and Pakistan were mistakenly included. NPR apologizes for these errors."This is not the first time that media purveyors have wiped Israel off the map. In a 2016 CNN Money article, Israel was dropped from a map of the Middle East depicting turmoil in the province. On the map featured in the article, entitled "Beyond ISIS: 2016's scariest geopolitical hot spots," the name Palestina, Spanish or Portuguese for Palestine, stood in for Israel on the map.