US Ambassador to Israel Dan Shapiro notes that in the remainder of Obama's term "there's still time to make progress - in the right direction," toward a two-state solution. 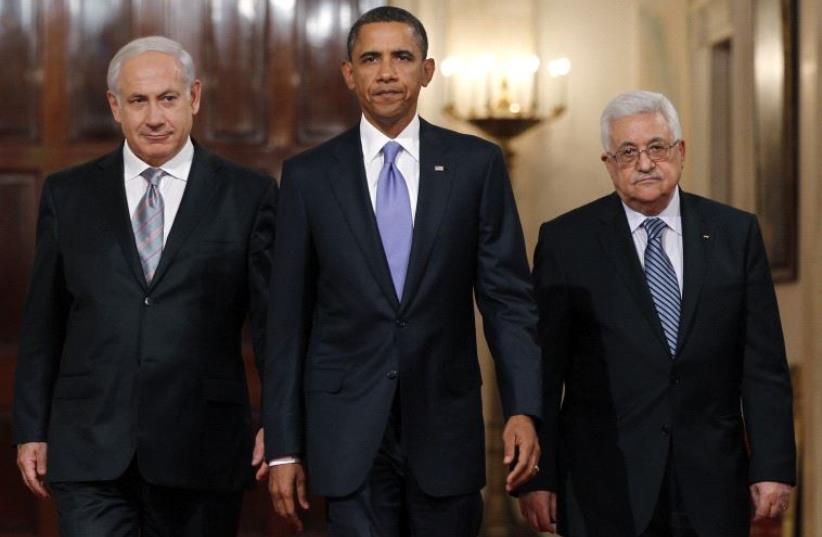 US President Barack Obama arrives with Prime Minister Benjamin Netanyahu (L) and Palestinian Authority President Mahmoud Abbas (R) in Washington September 1, 2010
(photo credit: REUTERS)
Advertisement
The White House is disappointed in the lack of progress in the Israeli-Palestinian peace process during US President Barack Obama's eight-year administration, said US Ambassador to Israel Dan Shapiro on Thursday. Speaking to Army Radio from the United States on the sidelines of the UN General Assembly debate, the ambassador spoke of Washington's sentiments toward the shortcomings as Obama had "sought to help Israel achieve its goal - two states for two peoples."In his last speech to the UN plenum on Tuesday, the outgoing US president touched briefly on the Middle East conflict, saying Israel would be better off if it did not “permanently occupy and settle Palestinian land.” The Palestinians, he said, would be better off if they were to “reject incitement.”During Obama's two terms as president, Shaprio told Army Radio that the US had hoped to see an advancement in resolving the conflict, and "so of course there is disappointment" in the impasse.  He added, however, that "at the same time there is still a desire and commitment to move forward as much as possible in the right direction."While the outgoing US administration is not expected to resolve the issue by the time Obama leaves office in January, Shapiro noted that in the president's time left, there is hope that "there's still time to make progress - in the right direction," toward a two-state solution. "We know and President Obama has acknowledged that we aren't expecting to reach that goal in the time that's left but he very much believes that there is a danger that if don't find a way to progress in this direction, we will progress in the wrong direction - toward the reality of one state with two people," Shapiro told the radio station. He added that a one-state outcome was not in the interest of the US, Israel or the Palestinians. However, all eyes remain on Obama to see if he will veto any one-sided resolution in the United Nations Security Council following the upcoming US elections. "There are things that Israel can do to make the situation is more positive," asserted the senior American diplomat, without mentioning similar hopes for the Palestinians. He underlined that while the US is perturbed about the stalled peace process, Washington hopes and encourages Israel to take those steps "in the right direction."  Shapiro, who was present at the likely last meeting between Obama and Netanyahu on Wednesday, expressed that the convening between the two was markedly cordial. Asked about the particularly positive air in the meeting, Shapiro said with only about four months left in office, Obama believes that Netanyahu will stay in power "for a much longer time."Asked whether Obama has a "sour taste in his mouth" regarding Netanyahu, the ambassador stated that while the two don't always agree, they have an understanding of how to work together. In response to Shaprio's remarks, Zionist Union MK Eyal Ben Reuven placed the onus on Netanyahu, saying "the state need something and someone else."He stressed that Israel is also disappointed in the political stalemate. "The State of Israel needs a different leadership," he charged, adding that "The prime minister should look at himself in the mirror and ask himself where we are headed."