Settlers to petition against Palestinian road

On Tuesday, settlers held a small demonstration on the new paved turn-off to the road, 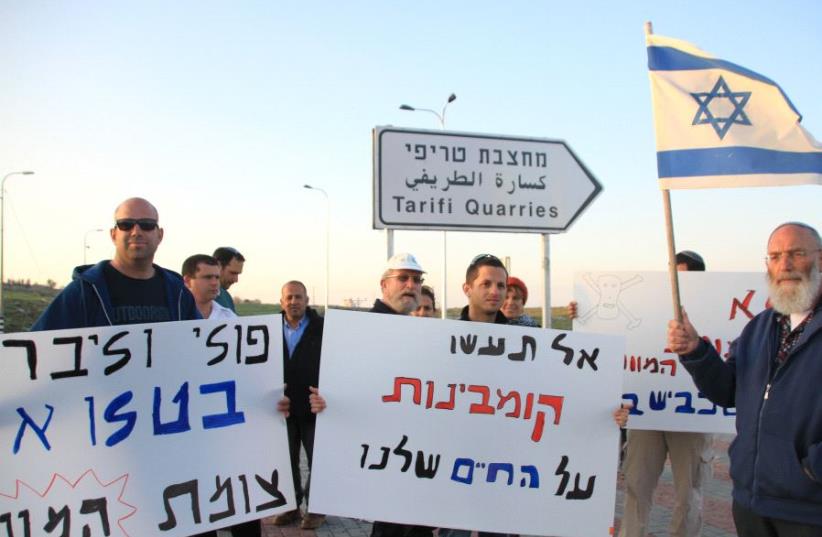 Settlers holding a small demonstration on the new paved turn-off to the road
(photo credit: TOVAH LAZAROFF)
Advertisement
Settlers want to stop construction of a private Palestinian road near Ofra that leads from Route 60 to a new quarry in Area B of the West Bank.Gilad Ach, who heads the Forum for a Green Israel, told The Jerusalem Post that the NGO plans to petition the High Court of Justice against the road.“We plan to send the petition on Sunday,” said Ach, who is a resident of the Eli settlement and whose group operates largely in Judea and Samaria.The High Court has already rejected two petitions against the road by the right-wing Regavim NGO.Settlers have long opposed the overall project, but became alarmed last week when construction was completed for a section of the road that leads off Route 60 and a sign was placed that says “Tarifi Quarry.” The sign for the new road in Area C went up around the same time the Border Police demolished nine settler homes inside the Ofra settlement, which were built on private Palestinian property.On Tuesday, settlers held a small demonstration on the new paved turn-off to the road, warning that the construction would turn Route 60 into a "road of death."The construction places large trucks on a road that is already too narrow to handle current traffic, said Regavim spokesman Avraham Binyamin.His group, he said, plans to hire a private assessor to investigate whether the construction meets dictates of a past court judgment that set boundaries to the project.Binyamin and Ach said the road was approved very quickly without proper procedures.But security sources said the project has been in the works for years and that the road has received all the necessary permits.The High Court, in rejecting the petition, also spoke of overall plans for the quarry and the road having been under way for almost two decades.A letter from the Civil Administration for Judea and Samaria to the group dated this week also stated that the road was authorized.Ach, however, said he believed the permits were for work done on Route 60 and did not involve this specific road.In addition, he questioned why the Civil Administration would approve construction of the road when it had yet to issue a permit for a factory in Area C connected to the quarry.The quarry is located in a region of the West Bank, which is under the civil control of the Palestinian Authority, and does not need a permit from the Civil Administration.Ach  group is also concerned about the environmental impact, because the Civil Administration will have little oversight of environmental regulations and their enforcement given that the quarry is located is Area B.