‘Our present to Obama has to be new settlements’

Israel is fearful that Obama might take some kind of significant decision in regard to the Israeli-Palestinian conflict, thereby making it a difficult time to approve such legislation. 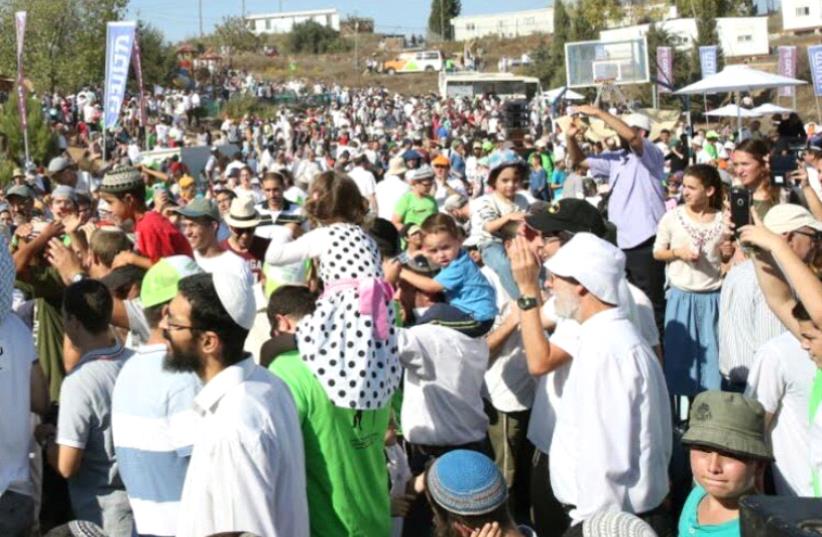 Amona protest
(photo credit: Courtesy)
Advertisement
Israel should approve new settlements as a "goodbye gift" to US President Barack Obama, MK Bezalel Smotrich said on Thursday.He spoke at a rally of thousands of protesters who had gathered at the Amona outpost to warn the government against abiding by the High Court of Justice decision to destroy the small community of 40 families by December 25.“Our present to Obama must be new settlements. It is also what we must prepare for the person who enters the White House,” said Smotrich.He called on Prime Minister Benjamin Netanyahu to support legislation, known as the Regulations Act, which would retroactively legalize some 2,000 unauthorized homes in Judea and Samaria.Should Netanyahu fail to stand behind this bill, Smotrich said, “we plan to move forward with it in full force.”The question should not be which Jewish community to evacuate, but “where to build the new one,” he said.The evacuation is slated to take place during the "twilight period" of Obama’s presidency, the two-month window between presidential elections on November 8 and when he leaves offices in January 2017.Israel is fearful that Obama might take some kind of significant decision in regard to the Israeli-Palestinian conflict, thereby making it a difficult time to approve such legislation.The Regulations Act is also legally problematic and Attorney-General Mandelblit has already stated that its unconstitutional.Also addressing the rally was Agriculture Minister Uri Ariel (Bayit Yehudi), who urged Netanyahu to take action.“With all due respect to the president on the other side of the ocean and to legal advisers, “the key to the solution is in your hands.”When the Fall Knesset session starts, many politicians will demand either a governmental or a legislative solution to the issue of unauthorized homes Judea and Samaria, Ariel said.“Anything else is a waste of time,” he said.Deputy Defense Minister Eli Dahan said, “without a regulations bill, there won’t be a government.”Netanyahu, however, has long been loathe to approve such legislation irrespective of the timing, preferring instead to find piecemeal solutions. Among them is swaying settlers in such situations to voluntarily leave their homes in exchange for promises of building approvals elsewhere.He has also stood with the courts and in opposition to the authorization of construction on private Palestinian land, such as in Amona’s case.At the rally, both settlers and right-wing politicians said that they would not accept anything less than the authorization of Amona in its present location.Amona spokesman Avichai Boaron urged Netanyahu to take note of the thousands of protesters present at the rally and to consider that they could return to the hilltop to help prevent a December 25 evacuation.The days when people witnessed the destruction of 21 settlements in Gaza and four in Samaria has passed, he said, as has the time of the “pogrom” that occurred in 2006, when security forces destroyed nine permanent Amona settlement homes.“Netanyahu, I am telling you, that we will prove with our bodies that Amona will not fall again,” Boaron said.Samaria Regional Council head Yossi Dagan, whose Samaria community of Homesh was destroyed by the government in 2005, said that “these are the people who were 11-years ago. That time is over. We won’t be suckers again.”“The extremist Left-Wing that lost the last election is now using the court system to push us into a second Disengagement,” Dagan said.Avi Ro’eh, who heads the Council of Jewish Communities of Judea and Samaria, said that If Amona is evacuated, more evacuations will follow.There are more than 2,000 West Bank homes with the same legal status, including homes in Ofra, Ro’eh said.He called on Netanyahu to proclaim, “I refuse to evacuate a single home until a comprehensive solution is found.”The Likud said in response that Netanyahu was working calmly and responsibly to find a solution to the problem of Amona, together with the defense minister, justice minister and attorney general.It is unfortunate, the Likud party said, that rather than engaging in this effort, there are those who prefer to engage in baseless and irresponsible political attacks that only makes it more difficult to resolve the issue with Amona and which is harmful to the overall settlement enterprise.