Villagers in Sussiya describe life in the shadow of demolition orders

"Our steadfastness is a triumph of defiance against Israel." 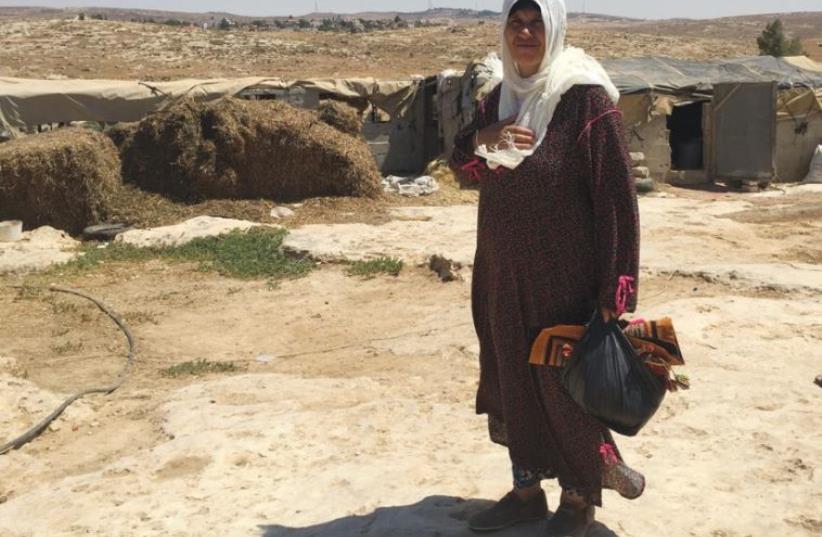 villager in sussiya
(photo credit: SETH J. FRANTZMAN)
Advertisement
“God willing, the international campaign will be successful because we are peaceful people and we have been living here as neighbors with the [ Jewish] settlement for 30 years and never attacked them. But they have attacked us many times,” explains Jihad Nawajah, the head of the village council of Sussiya.It was a mildly hot day in the “greeting tent” at the entrance to the small Palestinian community situated on the hard-scrabble, rocky terrain of the southern West Bank.
In Susiya, Palestinians count down to their village"s demolition
The village and Israel’s policies have been in the spotlight in recent months in the run-up to an August 3 court hearing before the High Court of Justice. In May, the High Court denied a petition to block demolition of illegally built structures, and the Civil Administration intends to move forward with the removal of 30 of the tents and structures at the site.On July 16, the US State Department urged Israel not to proceed.“We’re closely following developments in the village of Sussiya in the West Bank, and we strongly urge the Israeli authorities to refrain from carrying out any demolitions in the village,” it said in a statement.The EU and various human rights organizations have protested Israel’s actions as well. In addition, hashtags on twitter, such as #freeSussiya, have become part of a popular campaign aimed at preventing its removal.A 15-minute drive south of Hebron, the village is marked by graffiti on a small access road that bypasses it near a Jewish community of the same name. On one side of the road is a Hebrew sign pointing to the archaeological site of ancient Sussiya. The sign was defaced in recent months with red letters reading “Free Sussiya.”A dirt road leads to one of the many tents that make up the homes of the community.There is running water from tanker trucks and limited electricity. Here and there are logos of various European organizations and NGOs that have donated infrastructure to the 340 residents.One tent has a tarp labeled: “Norwegian People’s Aid.” A newly built playground for children sits not far away from a rusted piece of an old plow. An EU sticker notes that a portion of a wall has been built by an organization providing “health assistance to people living in communities whose rights are inadequately protected in the West Bank.”The 340 people in the village are all family members, and many of them are young.Jihad and Samieh Nawajah have eight children.Those born before 1986 recall growing up in “old Sussiya” nearby.Jihad, who was born in 1967, recalls eking out a living while making homes in the caves in the historic landscape.“We can’t build houses; the military supports the settlers,” he says.They describe years of harassment.“In 1991, Israel established [the settlement] of Sussiya,” Jihad explains, gesturing toward the red roofs of the Jewish homes a kilometer away. “Their main goal is to connect the settlement to the religious [archeological] site on the other side and take our land. But this is our land.”They say the Israelis agreed to postpone any eviction until after Ramadan, and now with the holy month over, they are hoping international pressure will mean they receive a stay of demolition after August 3.They also feel they are the tip of a much larger struggle in the West Bank and the region, even if their current lifestyle, living in tents, is not the normal life they would choose.“People misunderstand us and come and think we are Beduin. We are not. We are fellahin [peasants],” Jihad says.“We are forced to live in an intolerable situation,” he continues. “But our resistance will be a triumph for everyone. We are indigenous and we were treated badly for many years. But with an iron fist we will be defiant against Israel.”Mohammed Nawajah, an elderly man speaking with some of the Europeans, reminds them that the land is registered in their names with the Palestinian Authority “and back through the Turkish period.”He looks at the situation from more of a legal perspective, saying the High Court likely will favor Israel’s stance because “one of the judges lives in Gush Etzion, which is one of the biggest settlements.... We live under military law, but Israelis live under civilian law, so if I do defend myself when they come to demolish my house, then it is my fault.”The residents describe a long and circuitous process in Israeli courts that have not sided with them.“Even to build a stone house we would need permission, and they will not give us permission,” Nawajah adds. “They don’t want Palestinians here. They claim it is for security, but it is for the settlement.”The villagers understand they are at the center of a major battle between the Palestinian Authority, the International Community and Israel over land rules in the West Bank.“Yes, they use us,” one young man jokes.But the feeling is that they are the native inhabitants.“Do you know where the Jews come from that live there [in Sussiya]? From Egypt.They were expelled by Ariel Sharon in the 1980s and came here in 1986.” He is referring to settlers forced out of the Sinai as part of the peace deal with Egypt.But, for many of the residents, the last few years have seen some improvements.The Palestinian Authority now provides a bus to a neighboring village for high school students, and Samieh Nawajah notes that the younger generation is literate, whereas those born before 1980 often could not read.“It would be our happiness not to be displaced.We are victims of troubles between Israel and other great powers,” she says. “If Israel demolishes us, it will show they have the dominant position in the world.”