“It’s quite pathetic to be arrested for having a cup of coffee with your neighbors,” said Efrat council head Oded Revivi 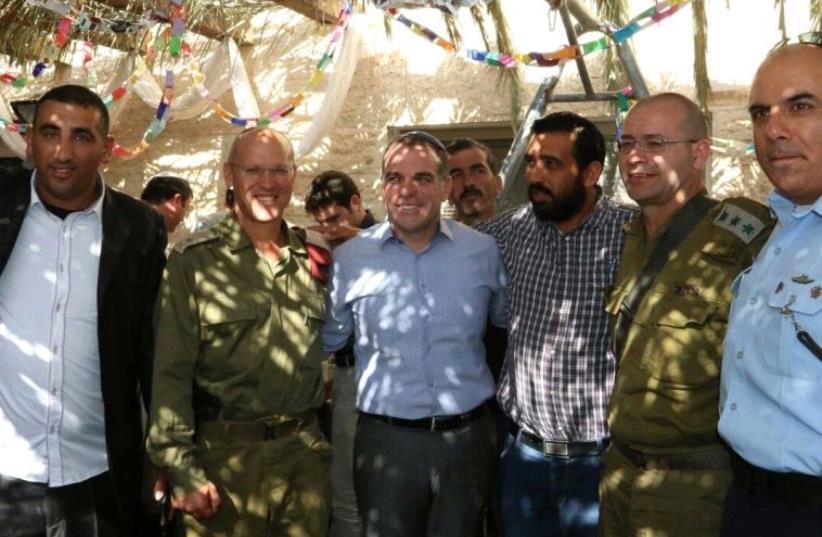 EFRAT COUNCIL head Oded Revivi hosts 30 Palestinians from the Bethlehem and Hebron area and representatives of the IDF and Border Police in his succa on Wednesday.
(photo credit: SHMUEL FITOUSSI)
Advertisement
In a move against normalization with settlers, Palestinian Authority security forces have held four Palestinians from the village of Wadi al-Nis since Thursday after they visited Efrat council head Oded Revivi's succa.“It’s quite pathetic to be arrested for having a cup of coffee with your neighbors,” said Revivi, who has turned to the media in the hopes of pressing the PA to release the four men.The residents of Wadi al-Nis were part of a group of 30 Palestinians from the Bethlehem and Hebron area who came to Revivi’s home on Wednesday, for what he had hoped would be fulfillment of the term ‘Succa of Peace.’ Among the guests were representatives from the IDF and the Border Police, including Maj.- Gen. Nitzan Alon, who at the time said that Efrat had always been a model for good relations with its neighbors.“When we meet and talk, it is possible to overcome many challenges, even security ones,” Alon said.Col. Roman Gofman, commander of the Gush Etzion Territorial Brigade, said the gathering at the succa was a good start for what he hoped would be more such meetings.Just after the meeting, Revivi spoke with a group of parliamentarians from 18 countries who were visiting Hebron and Gush Etzion with the help of the Israel Allies Foundation.He explained that he has worked to build bridges with the Palestinian villages around his settlement, because he believes that peace comes from on the ground, person to person contacts.With respect to Wadi al-Nis in particular, he spoke of how he had gone there to visit a family whose six-year-old child had been killed in a car accident that involved a driver from his community.Everyone, he said, had greeted him warmly and had even posted photographs with him on social media.He met with the head of the village, and promised to place speed bumps in that area. The connections that he built at the time, he said, led to the visit in his succa.On Saturday night, Revivi said he was unable to determine what had happened to the four visitors from Wadi al-Nis.“I’m sorry that human rights organizations have not spoken out about this situation,” he said.In an interview with Wattan TV on Thursday, the PA’s Deputy Governor of Bethlehem Muhammad Taha said the incident was under investigation. The government, in coordination with the PA security forces, will hold these people accountable according to Palestinian law, he said.Taha clarified that the participants will be dealt with through legal processes, and added that what they did is not a part of his people’s culture and upbringing.“All Palestinians condemn the [visit], and visiting settlers is completely unacceptable,” he said.Khaled Tafish, a parliamentarian in the Palestinian Legislative Council, added, “If they knew that there would be a punishment and that they will be pursued for doing that, then the incident would not have happened.”