Would be first major PA presence since Orient House was removed in 2001. 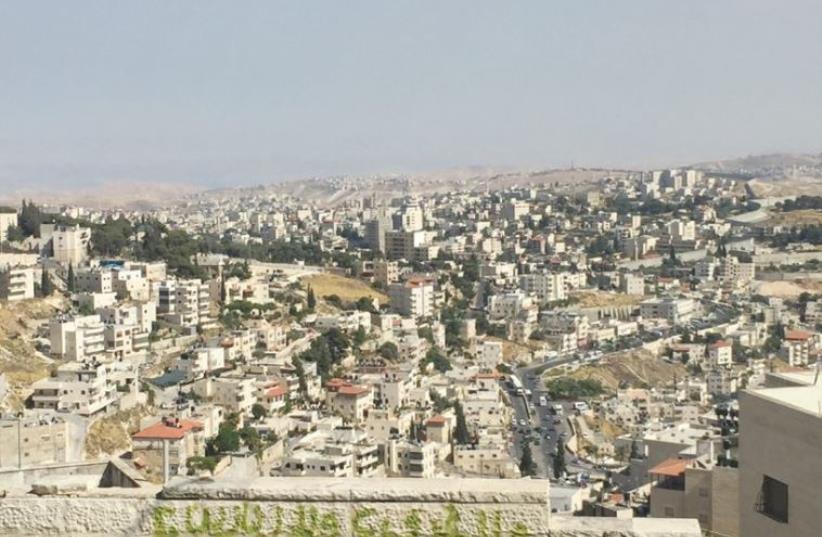 A VIEW from a-Tur of Arab neighborhoods in east Jerusalem, with Abu Dis, beyond the security barrier, in the distance.
(photo credit: SETH J. FRANTZMAN)
Advertisement
The Palestinian Authority is considering a proposal to create a municipal council in east Jerusalem.If established, the council would be the first major official Palestinian presence in the capital since 2001, when Israel removed the PLO from the Orient House, its former Jerusalem headquarters.Mohammed Shtayyeh, a member of the Fatah Central Committee, told the al-Quds daily Palestinian newspaper on Sunday that the Palestinian leadership is currently reviewing the proposal because Israel rejected the PA’s request to hold elections in Jerusalem.“In light of Israel not permitting us to hold elections, we are studying the appointment of a municipal council to revive the city and aid its people,” he said.Wasel Abu Yousef, a member of the PLO Executive Committee, told The Jerusalem Post that, “The council would focus on providing services to Palestinians in east Jerusalem and its surroundings in light of the clear differences in services between east and west Jerusalem,” However, he admitted the PA does not expect the council to be allowed, as Israel has never approved such proposals in the past.A Jerusalem Municipality spokesman told the Post that the issue is a state matter and beyond its jurisdiction.The Palestinian leadership believes it has a responsibility to improve conditions for Palestinian Jerusalemites, Abu Yousef stated further. “As Jerusalem is the capital of the State of Palestine, it is necessary for the Palestinian leadership to strengthen its residents.”The Prime Minister’s Office did not respond to requests for comment. Netanyahu has repeatedly said Israel considers Jerusalem its “eternal and undivided capital” and will not entertain proposals to concede the eastern half of the city to the Palestinian Authority. The Orient House served as the official Palestinian legation in Jerusalem until Israel closed it in 2001 during the second intifada.Since then the PLO and PA presence in Jerusalem has dwindled.