Mohammad Shtayyeh, a member of the Fatah Central Committee, made the remarks in an interview to the Jordanian 'Al-Ghad' newspaper. 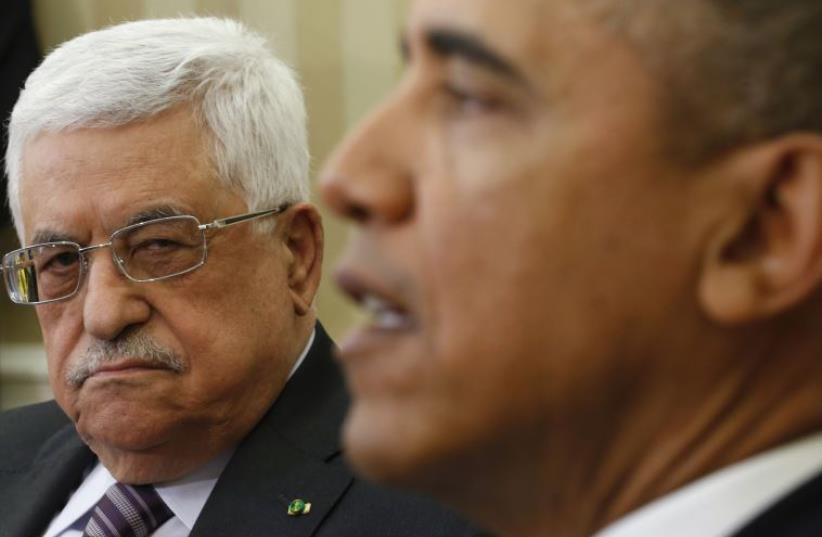 US President Barack Obama meets with Palestinian Authority President Mahmoud Abbas (L) at the White House
(photo credit: REUTERS)
Advertisement
The Palestinians are demanding that US President Barack Obama recognize the Palestinian state during the upcoming session of the United Nations general assembly in New York, a senior Fatah official said on Sunday.Mohammad Shtayyeh, a member of the Fatah Central Committee, told the Jordanian Al-Ghad newspaper that Palestinian Authority President Mahmoud Abbas would meet with US Secretary of State John Kerry on the sidelines of the session to discuss efforts to revive the stalled peace process and the situation in the Palestinian territories.Shtayyeh said Abbas was planning to address the General Assembly “in his capacity as the president of the state of Palestine, unless he decides not to seek reelection as Chairman of the PLO Executive Committee.”The PLO’s parliament-in-exile, the Palestinian National Council (PNC), is scheduled to meet in Ramallah ahead of the General Assembly to discuss electing new members of the Executive Committee. It’s not clear at this stage whether Abbas will seek reelection during the PNC session.Shtayyeh predicted that the PNC, which is expected to meet on September 14 and 15 in Ramallah, would reject Abbas’s plans to resign from the PLO Executive Committee.The PNC was expected to elect new leaders for the PLO, which would be separated from the PA, Shtayyeh said, adding that the PLO would remain the sole and legitimate representative of all Palestinians and abide by the “right of return” for Palestinian refugees.The PNC session is open to all Palestinian factions that wish to participate, including Hamas, he said.Hamas and several other Palestinian factions already have announced that they would boycott the PNC session.The top Fatah official called on Hamas to allow the 160 PNC members from the Gaza Strip to travel to the West Bank to attend the session.“It’s inconceivable that while Israel is allowing delegates to come to Ramallah, Hamas would ban PNC members from leaving the Gaza Strip,” Shtayyeh said.He said the US should follow the more than 130 countries that already have recognized the Palestinian state on the pre- 1967 lines.“It has become imperative for President Obama to recognize the state of Palestine in accordance with his policy in the wake of Israeli intransigence and ongoing settlement construction,” he added.Meanwhile, Hamas said on Sunday that any long-term truce agreement with Israel should include the reopening of the airport and the building of a seaport in Gaza.The airport, which is named after Yasser Arafat and is located in the southern Gaza Strip, stopped operating at the beginning of the second intifada when the IDF destroyed parts of its tarmac.Musa Abu Marzouk, a senior Hamas official, said such an agreement also should include the reopening of the Rafah border crossing with Egypt and the lifting of the blockade on Gaza.His remarks came amid reports Israel and Hamas are conducting indirect negotiations to reach an agreement over a long-term truce in the Strip.Abu Marzouk dismissed allegations by some Palestinians that Hamas was seeking to strike a deal with Israel that would turn Gaza into a separate political entity.He said Hamas would not sign any accord with Israel that does not win the backing of other Palestinian factions, and that Hamas has relayed its position to former British Prime Minister Tony Blair, who has been acting as a mediator between the movement and Hamas, as well as the Palestinian Authority, the European Union and the Arab and Islamic countries.