Criticism of Abbas spread through social media with the hashtag, "Offering condolences for death of Shimon Peres is betrayal," gaining popularity. 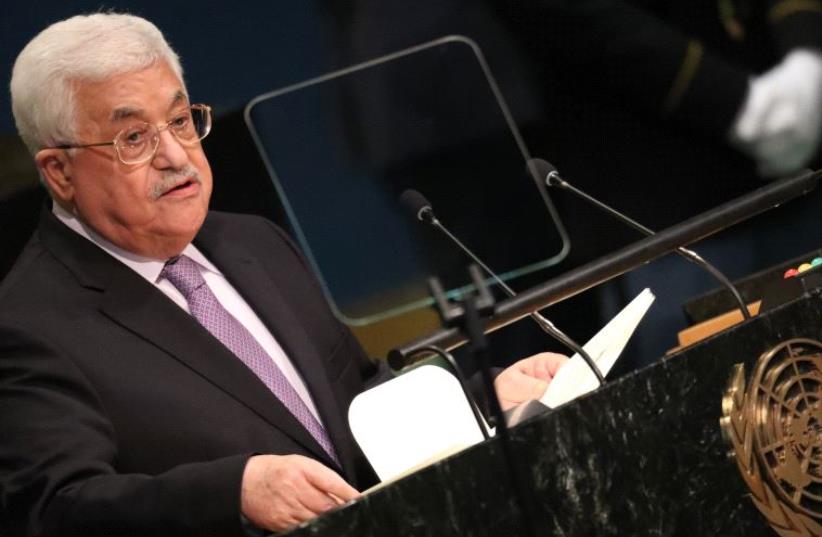 Palestinian Authority President Mahmoud Abbas addresses the 71st United Nations General Assembly in Manhattan, New York, US September 22, 2016
(photo credit: REUTERS)
Advertisement
Palestinian Authority security forces arrested Osama Mansour, an officer in the Palestinian Military Liaison, on Saturday morning, according to Mansour’s family.Mansour criticized PA President Mahmoud Abbas for attending the funeral of former president Shimon Peres in a Facebook post on Friday.In his post, Mansour wrote that Peres was the “founder of the settlements,” and was responsible for “the continuation of Palestinian suffering.“In any case, whether he was or was not a terrorist, or was or was not responsible for the idea of ‘breaking the bones’ of the first intifada, or had or didn’t have a role in the Jenin refugee camp massacre or the Yasmin neighborhood massacre in Nablus, or whether he was or was not connected to the Kana massacre... Who is he [Peres] that you are going to participate in his funeral, while most of your people, who you represent, reject him?” Mansour said.“If you decide to participate in the funeral of the killer of our people on your own, you will have made a mistake. If you have decided based on the advice of others, then they have misled you.”Mansour concluded that there should be “no personal or friendly connection with the occupier, as long as its policies against our people continue.”Abbas has been harshly criticized for attending Peres’s funeral. The official Fatah Facebook page posted that it “is not satisfied” with his participation.Tawfiq Tirawi, a Fatah Central Committee member, said that he himself would not go. “If they had asked me, I would have said clearly, ‘I am in principle against participation, as this was the funeral of a Zionist who was soaked from head to toe in the blood of our Palestinian nation and other Arab peoples,’” Tirawi said.Hamas leader Mahmoud Zahar said that “Abbas does not represent the Palestinian people,” and called him “an Israeli creation, and a Jew according to Islamic law,” wishing that he be “sent to hell with Peres.”Moreover, the Twitter hashtag “offering condolences for the death of Peres is treason” has gained popularity.Despite all the criticism, official PA media called Abbas’s decision to attend the funeral a good choice, speaking of how it created the opportunity to return to negotiations and advance Palestinian interests.Wafa, the official PA news agency, published an interview with Palestinian expert in Israeli affairs Fayez Abbas, who argued that “Abbas’s participation did a great service for the Palestinian issue.”Moreover, the news agency quoted a Zionist Union MK as saying, “Abbas has created a new opportunity to return to negotiations.”A senior Palestinian official told Israeli radio on Saturday that PA President Abbas has no regrets about attending the funeral, and that the Palestinian leader sent a clear message that he is a partner for peace.Adam Rasgon contributed to this report.