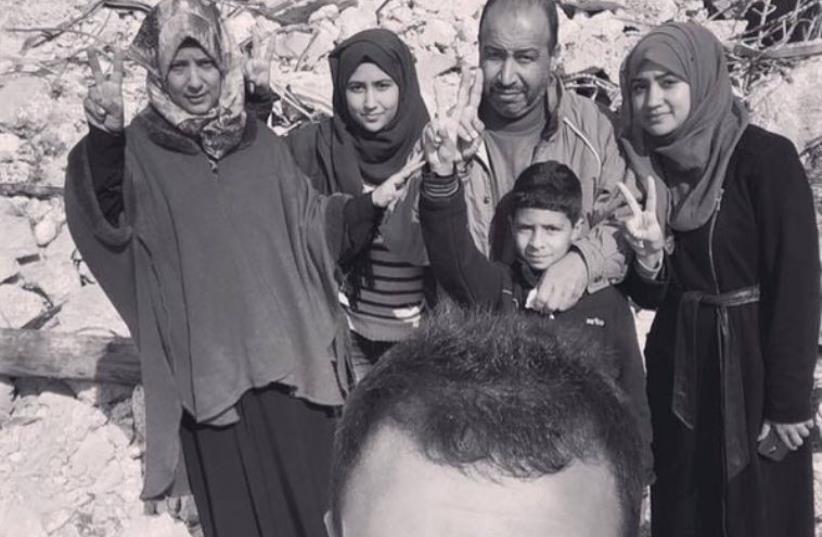 Family of Palestinian who carried out stabbing attack smiles in selfie at site of the ruins of their home, demolished by the IDF
(photo credit: ARAB MEDIA)
Advertisement
The Municipality of Surda/Abu Kash in the Ramallah area decided on Sunday to name a public park after Muhannad Halabi, who killed two Israelis in Jerusalem’s Old City last October.The new park will be built on the site where Halabi’s house existed before it was demolished by the IDF earlier this month. Halabi, a 19-year-old Palestinian law student at Al-Quds University from a village near Ramallah, went on a shooting and stabbing spree in October killing two before he was shot dead by police. The attack took place at the Lion's Gate on Succot as the victims were en route to the Western Wall. Halabi stabbed a couple and their toddler son and then grabbed a pistol from one of his victims and began firing wildly into the crowd until a border police officer shot him from 50 meters away, killing him. The victims of the attack, one of the first in the current wave of terror attacks that have plagued Israel over the last four months, were Rabbi Nehemia Lavie, 41, an Old City resident who worked at the Ateret Cohanim Yeshiva, near the place he was killed, and Aharon Benita from Beitar Illit, the father of the toddler also wounded in the attack.Meanwhile, Palestinian activists announced on Sunday that they have collected a total of 650,000 Shekels in donations to build a new house for the Halabi family following the launch of a crowdfunding campaign.The campaign, used by Palestinians to protest against Israel's house demolition policy, may become a tremendous success since many Palestinians view Halabi as the “hero who ignited the Third Intifada's fire.”Many Palestinians were outraged that the Palestinian Authority did not act to stop the house's demolition by closing the roads leading to the structure and preventing the approach of the Israeli forces.Following the destruction of their house on January 9, the entire Halabi family gathered around the ruins and took a selfie picture in which all family members are seen smiling and flashing the victory sign.The family members’ smiles just after losing their house are consistent with the behavior of many young Palestinians during the current terror wave which has seen Palestinian terrorists tend to smile to the camera, even when they are already arrested or physically injured by Israeli security forces. The phenomenon, known in Arabic as Ibtisamat (smiles) has even become a popular hashtag on Palestinian social media.Daniel K. Eisenbud contributed to this report.