There were no injuries to Israeli troops; attempted attack comes as tensions over Temple Mount flare. 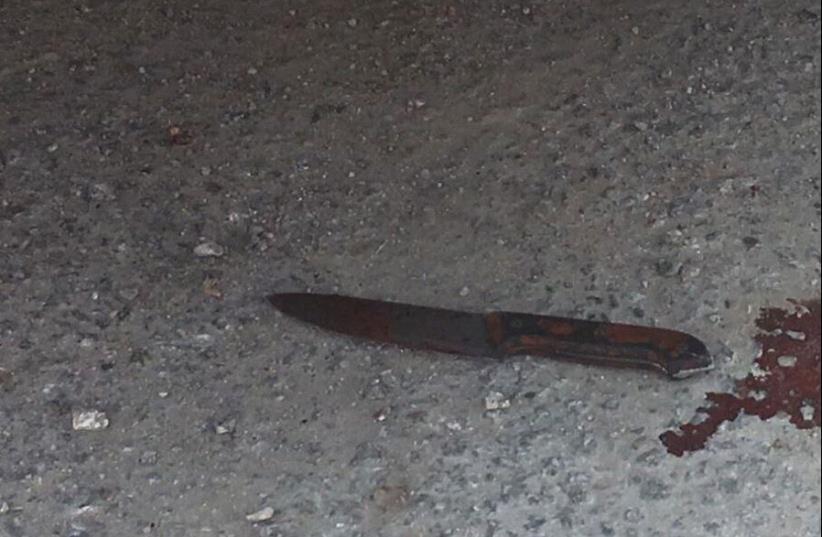 Knife from the scene of an attempted stabbing attack by a Palestinian assailant in the West Bank, July 20, 2017
(photo credit: IDF SPOKESMAN’S UNIT)
Advertisement
A Palestinian assailant attempted to stab an IDF soldier stationed near the West Bank settlement of Tekoa on Thursday afternoon, the military confirmed. Security forces shot and killed the would-be terrorist in response to the attempted attack.There were no injuries to the Israeli troops. The thwarted attack came as tensions remained high in the wake of a fatal shooting attack that killed two Israeli Border Police officers last week at the Temple Mount in Jerusalem. On Tuesday, two soldiers were lightly wounded in a suspected car-ramming attack near the West Bank settlement of Kiryat Arba.A Palestinian arrived driving a car at the entrance to the village of Beit Anun and accelerated into the troops, the army said. Forces responded by firing their weapons at the man, killing him.Tensions have flared between Israeli and Muslim authorities after Israel decided to place metal detectors at the entrance to Jerusalem's Temple Mount as part of extra security measures following Friday's attack.On Thursday, the IDF announced that it was prepared to place five extra battalions in the West Bank ahead of Friday prayers.