"People aren't waiting for instructions from anyone when committing a terrorist attack," Adnan Ghaith, the head of the Tanzim in Jerusalem, said. 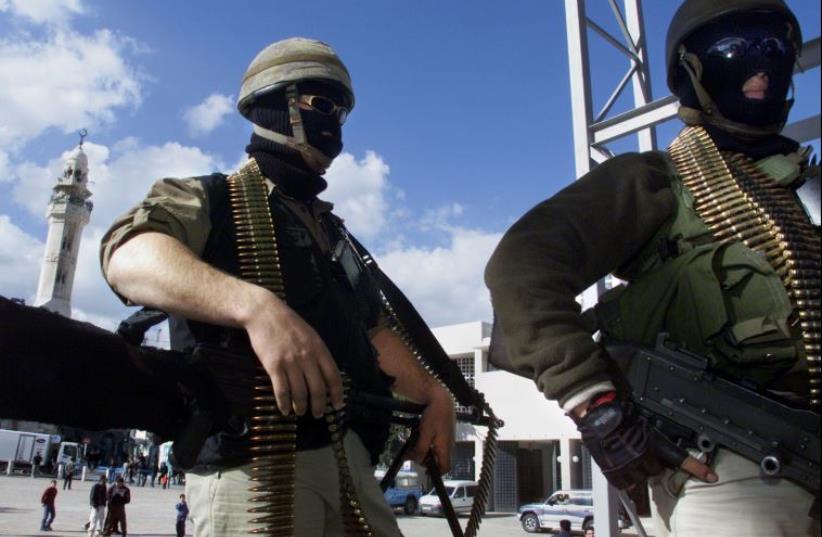 Heavily armed Palestinian Tanzim fighters congregate on a stage in Manger Square in the West Bank town of Bethlehem
(photo credit: REUTERS)
Advertisement
Adnan Ghaith, the head of the Fatah-affiliated Tanzim militant organization in Jerusalem, said on Thursday that the Palestinian Authority is incapable of stopping attacks against Israelis as long as the Netanyahu government "continues its policies."According to Ghaith, "if [Prime Minister Benjamin] Netanyahu continues on his path, the situation will escalate.""People aren't waiting for instructions from anyone when committing a terrorist attack," Ghaith said.When asked by Israel Radio if the Tanzim planned on joining the current wave of violence, Ghaith was evasive.Last week, the Fatah movement's armed wing, the Al-Aksa Martyrs Brigades, called for more attacks against Israel.The military arm of Fatah, the secular organization which has dominated the Palestine Liberation Organization and is under the control of Palestinian Authority President Mahmoud Abbas, posted on its Twitter account an explicit call for Palestinians to carry out attacks against Israelis.Violence in the capital had abated significantly this week after police set up multiple roadblocks and heavily armed checkpoints, coupled with intensive spot checks, in east Jerusalem Arab neighborhoods.Police spokesman Micky Rosenfeld said roadblocks placed over the past several days in Jebl Mukaber, Shuafat, Silwan, Ras el-Amud and Isawiya have been instrumental in stymieing further terrorist activity.“The results of our emphasis on roadblocks and checkpoints throughout the capital can be felt on the ground,” Rosenfeld said on Tuesday.“Border Police are carrying out intensive spot checks in different Arab neighborhoods to find potential terrorists and prevent them from coming into west Jerusalem.More roadblocks and security measures will continue for as long as there is a threat of terrorist attacks.”Rosenfeld said nearly 5,000 officers from a range of units, assisted by hundreds of soldiers, have apprehended 490 Arab suspects since the terrorism wave began in the city at the beginning of the month.Citing acting police commissioner Asst.-Ch. Bentzi Sau’s Tuesday announcement that police expect to make hundreds of more arrests in east Jerusalem after forming six task forces with the Shin Bet (Israel Security Agency), Rosenfeld said the ongoing zero-tolerance strategy has finally leveled the playing field.“Thousands of police officers are leaving nothing to chance and will arrest all suspects who attempt to carry out attacks and disturbances until order is restored,” he said.