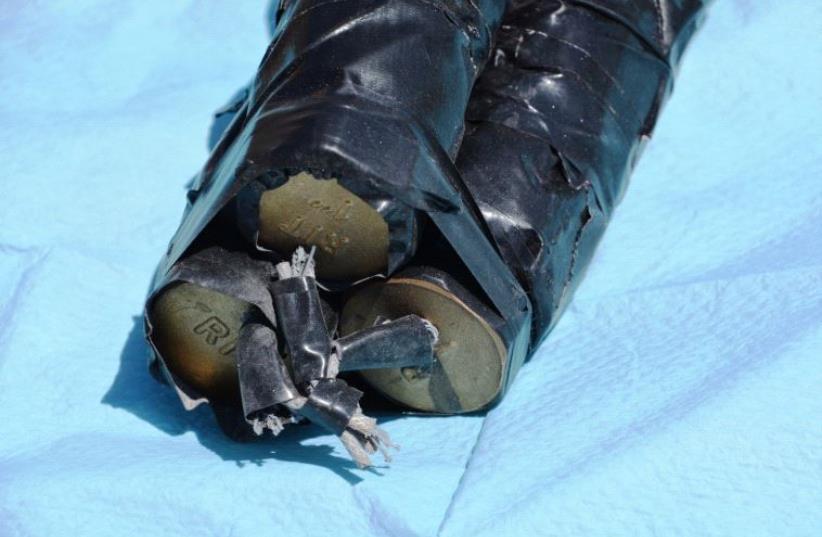 Pipe bombs found in the bag carried by Ali Abu Hassan, who planned an attack on the Jerusalem light rail on July 17
(photo credit: POLICE SPOKESPERSON'S UNIT)
Advertisement
A 21-year-old Palestinian civil engineering student from the West Bank’s Hebron University attempted to carry out a mass-casualty bombing attack on Jerusalem’s light rail last month to exact revenge for Jewish visitation to the Temple Mount, police said on Tuesday.On the morning of July 17, Ali Abu Hassan, from Beit Ila near Hebron, carried three pipe bombs in a bag to Jerusalem’s Jaffa Center light rail stop, which he intended to detonate during the rush-hour commute.According to a joint police and Shin Bet investigation released on Tuesday, Abu Hassan entered Israeli territory the day before the attempted attack through nearby Wadi Sur Bahir, and then changed his clothes into sportswear “to blend into the population,” police said.“The next day, during the early morning, he prayed in a mosque nearby, boarded a bus in Talpiot reaching the city center, and began to walk along the railway tracks on Jaffa Road until reaching the intersection of Jaffa and King George streets,” police said.“When he arrived at the light rail stop at Jaffa station, he began to explore the surroundings in order to find a place for the attack.”The joint investigation determined that Abu Hassan then observed the station from a nearby restaurant, and decided to target it after seeing many people boarding and exiting the train.Noting the suspect’s suspicious behavior, security guards stationed nearby questioned him and discovered he had three pipe bombs in his bag. They immediately placed him under arrest, and cleared the area of civilians.Minutes later, police sappers arriving at the scene found the connected bombs were intermixed with nails and screws saturated in rat poison, as well as discovering two knives in his bag.Police said that Abu Hassan planned the attack for several days.The light rail was shut down for over an hour, until the bombs were neutralized and the area cleared.“He purchased the equipment and resources necessary to make the pipe bombs, and then learned through the Internet how to prepare the explosives to cause maximum damage,” police said. “He later performed a test, and blew up a number of freight components in order to check them before entering Israel.”Upon leaving the West Bank to carry out the attack, Abu Hassan wrote a letter and last will that he gave to a friend from Hebron University to give to his parents.“The investigation also revealed that the bomber acted alone, and without organizational infrastructure,” police interrogators concluded.Abu Hassan is being charged with attempted murder, manufacturing weapons, and conspiracy to commit a crime. He remains in custody, and his detention has been extended until Friday by the Jerusalem Magistrate’s Court.