This is the first eviction in Shiekh Jarrah since 2009.

By UDI SHAHAM
SEPTEMBER 5, 2017 10:03
Member of the Shamsaneh family, who were evicted from their home in Sheikh Jarrah. (September 5, 2017)
(photo credit: UDI SHAHAM)
Advertisement
After eight years without any evictions in the east Jerusalem neighborhood of Sheikh Jarrah, members of the Shamesneh family on early Tuesday morning were forced out of the house where they say they had lived for more than 50 years. The house had belonged to a Jewish family until the War of Independence, when Jordanian authorities occupied the area.Police entered the Shamasneh house around 7 a.m. accompanied by three right-wing activists who were sent to assume ownership.The family received an injunction earlier this week saying there was at least another week until the eviction, but were later told it was annulled overnight by the Bailiff’s Office during a hearing the family was not told about until Tuesday morning. 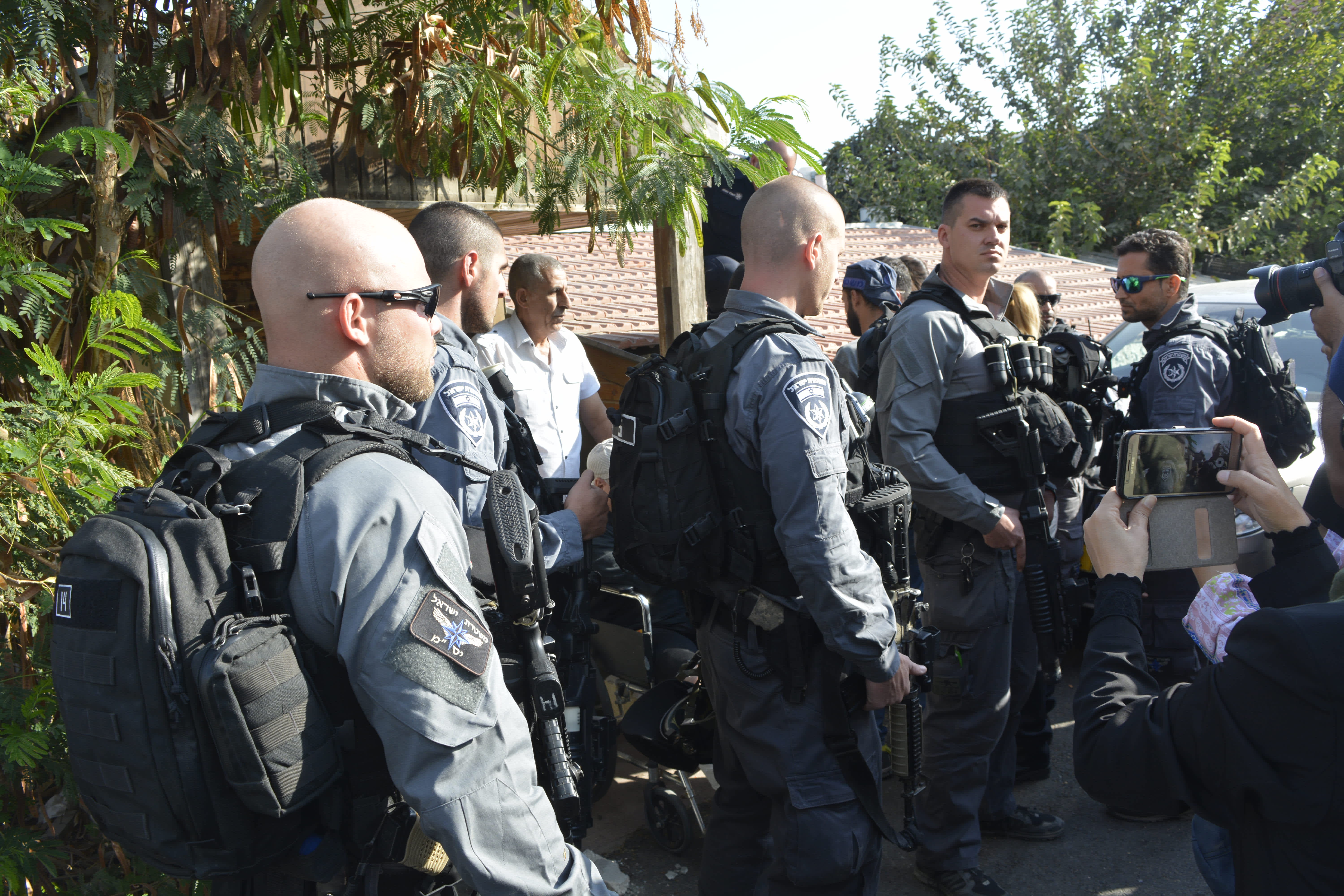 Police outside home to be evicted in Sheikh Jarrah, September 5, 2017.

The Jerusalem Post received a copy of a Bailiff’s Office document that was sent to the Shamasneh’s family lawyer on Monday, which said the injunction was canceled and reprimanding him for not following up on all the legal procedures involved in the process when the injunction was requested.During the eviction family members shouted, “This is the face of the occupation. This is the racist government.”However, the eviction was conducted without any violence by police or the family. Friends, neighbors and activists gathered near the house throughout the morning, holding signs which read, “Enough with the occupation” and, “Jews and Arabs refuse to be enemies.”At some point, someone spray-painted the word “thieves” in Arabic, Hebrew and English on the locked door of the house.After the eviction, Muhammad Shamsaneh tried to break into the house through the roof, but was stopped by the police, who told him that he would be arrested if he tried to enter again.Later on Shamasneh, 45, and his son Drar, 24, were arrested after they confronted police outside the house.There are eight people in the Shamasneh family, including a handicapped 84-year-old man and a 75-year-old woman.
Israeli police evict Palestinian family from home in Sheikh Jarrah, September 5, 2017. (Reuters)
The Shamasnehs say they have lived in the Sheikh Jarrah home since 1964, but the Jerusalem Magistrate’s Court ruling found that the family had failed to provide necessary documentation to prove residency for that long a period, which may have entitled them to tenancy protection under the law. The property was owned by a Jewish family before the 1948 war, whose members were forced out at that time.With the mediation of the right-wing Israel Land Fund, run by Jerusalem City Councilman Arieh King, the property was reclaimed as part of an effort to expand the Jewish settlement in Sheikh Jarrah.In 2013, the Supreme Court issued a ruling that the Shamasneh family needed to leave the house.Last month, the Bailiff’s Office issued an eviction order following a request by representatives of the owner of the house. The order ordered the eviction to be carried out by September 9.These types of evictions often happen in cases where Arabs live in properties owned by Jews before 1948, who were forced out when Jordan seized eastern Jerusalem.Such properties came under the jurisdiction of the Jordanian Custodian of Enemy Property.Since 1967, these properties have fallen under the jurisdiction of Israel’s Administrator General and Official Receiver. Under Israeli law, Jews who can prove ownership of properties in east Jerusalem can reclaim them.For now, there are six such homes in Sheikh Jarrah, including the one formerly inhabited by the Shamasnehs. Reports suggest that dozens of other homes are under the threat of eviction – mainly in the sub-neighborhood of Umm Haroun – where the Shamasneh house is located.An activist who is close to the Shamasneh family told the Post that the family’s eviction marks the beginning of a wide-ranging campaign to kick Arabs out of their homes and replace them with Jews.“They have thrown today three generations to the street – grandmother and grandfather, two parent and their four children,” said Eyal Raz. “Instead of them, they placed three settlers, who have no connection whatsoever to the legal inheritors [of the property].“The settlers started today a wide-range operation to empty Umm Haroun from its Palestinian inhabitants. They sent here extremist settlers... Their goal is to occupy,” Raz added.Former attorney-general Michael Ben-Yair, who grew up in Umm Haroun, attended the gathering outside the former Shamasneh residence.Ben-Yair has said the government should expropriate disputed properties in Sheikh Jarrah and give them to the Arabs who are living in them. He said he intends to claim ownership of his family’s property and give it to the family living there now.