According to Hajj, 215 trees belonging to four different families had been totally or partially axed. 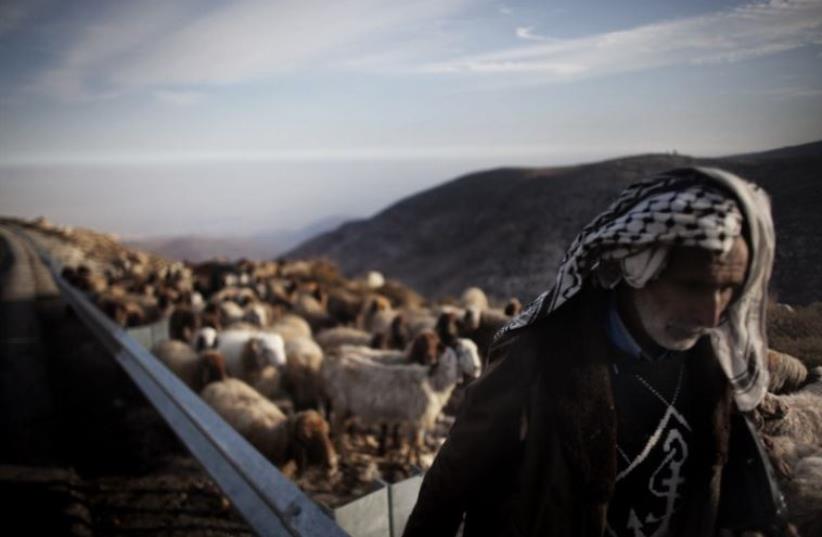 A Palestinian farmer tends to his herd in the Jordan Valley
(photo credit: AFP PHOTO)
Advertisement
Ali al-Hajj, a farmer from Mukhmas, has little hope that Israeli authorities will hold anyone accountable for cutting down his 17 olive trees, despite a police investigation into the incident.“I would not even say there is a 5% chance,” Hajj told The Jerusalem Post by phone on Thursday.Last Saturday, a shepherd herding sheep through farmlands that belong to Mukhmas – a Palestinian village outside of Ramallah in Area C of the West Bank – discovered scores of dismembered olive trees nearby, their limbs and branches severed.“I received a phone call on Saturday that the trees had been cut down,” Hajj said. “It was devastating.”The following day, he and 15 others went to see what happened.According to Hajj, 215 trees belonging to four different families had been totally or partially axed.Israeli NGO Yesh Din – Volunteers for Human Rights – reported more than 100 had been cut down.Hajj voiced little doubt that settlers had done the cutting.“Settlers always come and cause problems here,” he said. “There is no question that they were the ones who cut down our trees.”Police spokeswoman Luba Samri said on Tuesday that police were investigating the incident.A spokeswoman for the Binyamin Regional Council, Tamar Asraf, said she had no information and was awaiting results of the investigation.Hajj said a representative of COGAT – the Coordinator of Government Activities in the Territories unit, a branch of the Defense Ministry responsible for coordinating civil, economic, and security affairs in the Palestinian territories – photographed the scene on Sunday.“He promised us that they will do everything to bring us justice, but I know that he’s not actually going to do anything,” Hajj said. “It’s all talk.”According to Yesh Din, which monitors nationalistic crimes, very few such cases lead to convictions. In a report it issued in March it said that 289 nationalistic crimes that it monitored, indictments were filed in only 20 cases.Both COGAT and the IDF declined to comment.Hajj said he intends to replant. “All I can say is, God is above all of us and we will continue plant.”Tovah Lazaroff contributed to this report.