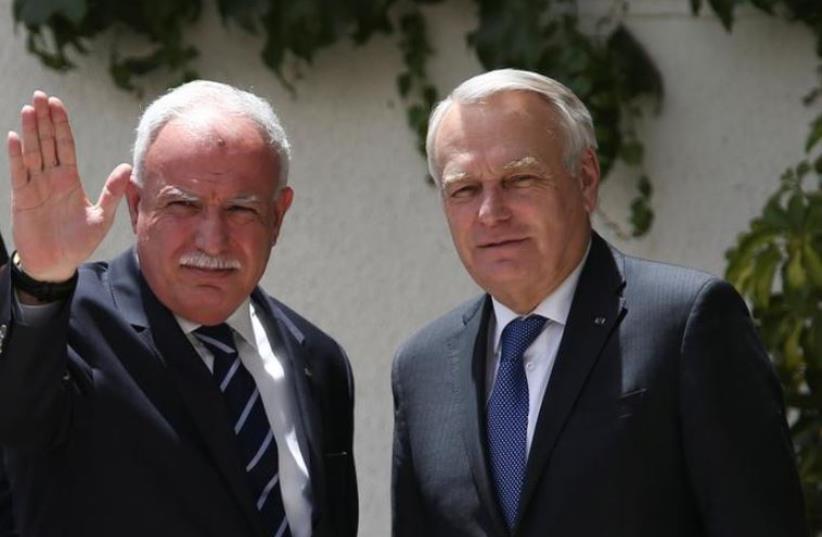 Palestinian Foreign Minister Riyad al-Maliki and French Foreign Minister Jean-Marc Ayrault.
(photo credit: REUTERS)
Advertisement
The Palestinian Authority is not opposed, in principle, to a meeting between President Mahmoud Abbas and Prime Minister Benjamin Netanyahu, PA Foreign Minister Riyad al-Maliki said on Saturday.“It has been confirmed to a number of countries in recent days that there is no obstacle in principle to convening a meeting between President Abbas and Israeli Prime Minister Netanyahu,” Maliki told the Ramallah- based Al-Ayyam daily.However, the PA minister warned that before a meeting between the two leaders can be held, there are conditions that Israel must fulfill.“First, there must be solid preparation for such a meeting to determine its goals and guarantee its outcomes.The Israeli side must give a sense that there is something new and commit to settlement freeze and implement signed agreements.”Maliki emphasized that the Palestinian leadership is not interested in holding a meeting that will lead nowhere.“We are not lovers of meetings for the sake of photos and media attention.”Maliki also said that such a meeting should not serve to bypass the French initiative to hold an international peace conference.Members of the PLO Executive Committee recently said that both Egypt and Russia are working to convene a meeting between Abbas and Netanyahu in Moscow.The Prime Minister’s Office said that Netanyahu is willing to meet with the PA president in Moscow, but without preconditions.