The man carried out a lethal stabbing attack at a supermarket in Germany after Israel placed metal detectors at the entrance to Jerusalem's Temple Mount, blaming the country for inaction. 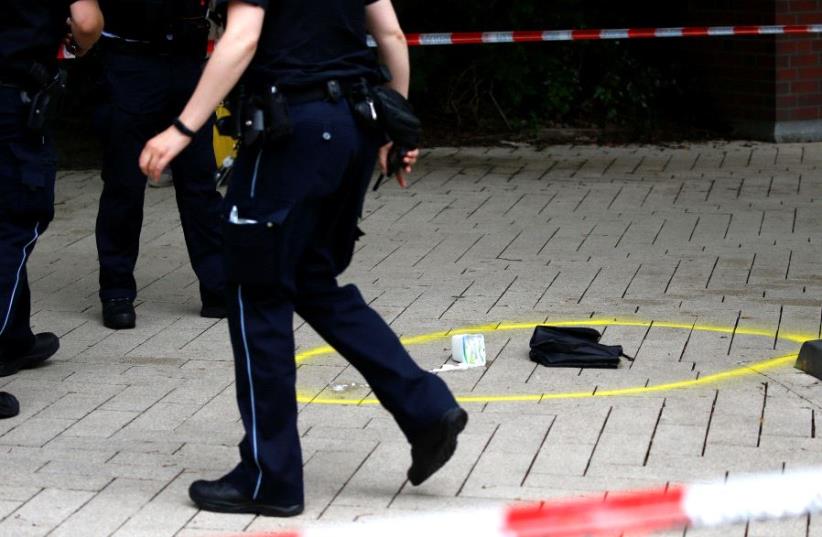 Police outside the Hamburg supermarket where a man attacked shoppers, July 2017
(photo credit: REUTERS)
Advertisement
Germany’s federal prosecution charged a Palestinian man on Friday with murder and six counts of attempted murder.Ahmad A., 26, wanted “to kill as many German nationals of the Christian faith as possible,” the prosecutor’s office said, according to the indictment.He wanted his actions “to be viewed in the context of an Islamic attack, and understood as a contribution to worldwide jihad.”Ahmad allegedly murdered one man, aged 50, with a 20-cm. knife and wounded an additional six people, at a supermarket in Hamburg on July 28. German authorities said Ahmad was not a member of Islamic State.He was animated to murder because of the “escalating conflict between Muslim believers and Israel security forces at the Temple Mount in Jerusalem,” the indictment states.On July 14, three Palestinian terrorists shot to death two Israeli policemen near the Lions’ Gate in Jerusalem’s Old City, using weapons that had been smuggled onto the Temple Mount. The attack prompted Israeli authorities to install metal detectors at the main entrance to the Mount.The new security measures unleashed Palestinian protests and riots.Ahmad, whose last name was not released to protect his privacy, “found the Israeli entry restrictions at the Aksa Mosque wrong and intolerable,” said the prosecutor’s office.Ahmad, said the indictment, considers “Germany jointly responsible” for the situation at the holy site, where the Aksa Mosque is located. Ahmad said German Christians should therefore die.Eyewitnesses at the supermarket reported Ahmad shouted “Allahu akbar” during the attack. He allegedly stole the knife from the supermarket.“Suddenly I saw a man smeared with blood running along the other side of the road with a knife,” Ralf W. told the mass-circulation Bild daily.Ralf said Ahmad yelled “Allahu akbar” as he fled the supermarket.The federal prosecution decided to pursue a criminal, rather than terrorism, case against Ahmad.If found guilty, he could receive a life sentence, but Germany’s criminal justice system frequently reduces murder sentences.Ahmad, who was born in the United Arab Emirates, sought asylum in Germany. He arrived in Germany in 2015 and his asylum application was denied.