The state wants to relocate the village to a plot of territory that is close to Area B, which is under the civil control of the Palestinian Authority. 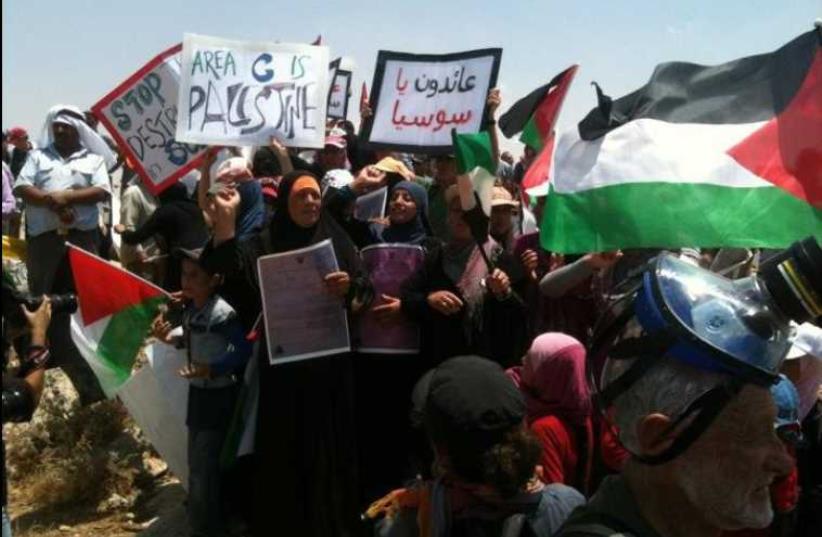 Palestinians demonstrate against the demolition of the village Sussiya by Israel, June 2012
(photo credit: Wikimedia Commons)
Advertisement
The battle to save the West Bank Palestinian village of Sussiya from the pending IDF demolition will get a boost of support Monday from Palestinian and European Union officials.Palestinian Authority Prime Minister Rami Hamdallah and the European Union representative to the Palestinian Authority John Gatt-Rutter will head a delegation of European officials that will visit Sussiya.The village which is home to 340 Palestinians, is located in the South Hebron Hills, next to the Sussiya settlement, in Area C of the West Bank, which is under Israeli civil and military control. The state wants to relocate the village to a plot of territory that is close to Area B, which is under the civil control of the Palestinian Authority.According to a report on Sussiya, published by the NGO B’Tselem, the village was initially located in the middle of an archeological site, but was forced by the IDF to relocate to its present location in 1986.In 1986, the IDF forced the village to relocate to its present location. The villagers rebuilt their homes of tents and temporary structures on agricultural land they owned just a few hundred meters away.The fate of the village is now before the High Court of Justice which is examining a petition by Rabbis for Human Rights with regard to a master plan it prepared that could allow for the legalization of the structures.The Civil Administration has rejected the master plan, but Rabbis for Human Rights appealed the decision and asked the High Court of Justice to intervene.The court agreed to hear the case but failed to approve an injunction to prevent the demolition of the village during the judicial proceedings. Members of the village and non-governmental groups who fear that existing demolition orders against the village could be carried out at any time, have mounted a stiff public relations battle in support of Sussiya.On Friday, the NGO Combatants for Peace held a protest rally in Sussiya with activists from Israel and abroad.