Rajoub’s critics take to social media to strongly condemn his decision and call for his dismissal from his job. 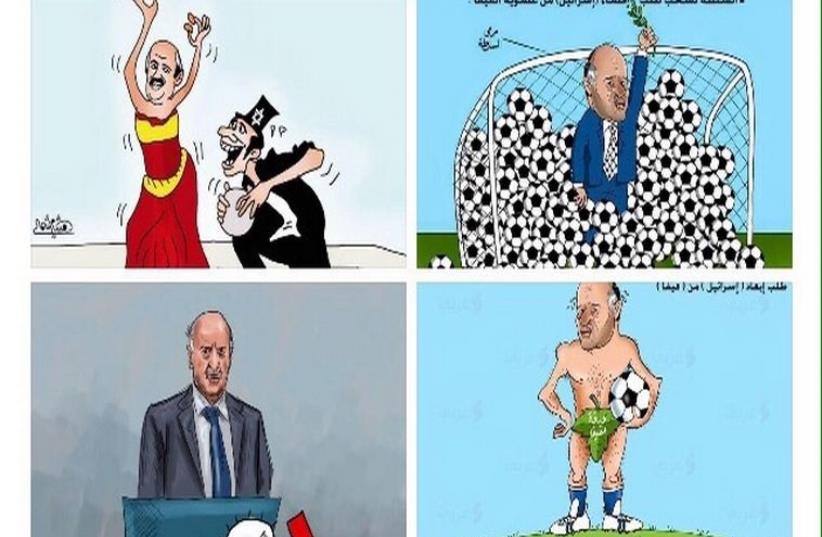 Caricatures depicting Palestine Football Association President Jabril Rajoub
(photo credit: screenshot)
Advertisement
Jibril Rajoub, chairman of the Palestinian Football Association, is facing sharp criticism for dropping his demand on Friday to suspend Israel from the FIFA world soccer federation.Rajoub’s last-minute announcement came as a surprise to many Palestinians, especially after his repeated statements that nothing would stop him from pursuing his anti-Israel bid.On the eve of FIFA’s 65th Congress in Zurich, Rajoub’s PFA organized several protests in the West Bank and the Gaza Strip in favor of the expulsion of Israel from the international body.On Saturday, the PFA’s website was hacked by angry protesters who denounced Rajoub as a “traitor.”Many Palestinians also expressed outrage over the handshake in Switzerland between Rajoub and Ofer Eini, chairman of the Israel Football Association, which took place shortly after the former announced his decision to abandon the motion asking for Israel to be suspended from FIFA.Rajoub’s critics took to social media to strongly condemn his decision and call for his dismissal from his position.Scores of Palestinians signed an online petition calling for the firing of Rajoub for his “surprise and uncalculated” move. “This decision has caused enormous damage to the Palestinian cause and sports,” the petition reads. “The Palestinian people need serious leaders who are capable of achieving the right to self-determination.”Some Palestinian activists expressed deep concern that Rajoub’s decision would hinder efforts to promote boycotts against Israel in the international community. Others launched an online campaign titled “Red Card for Jibril Rajoub.”One activist wrote: “Rajoub’s decision is a severe blow to millions of Palestinians and those who support our cause. It’s time to say enough to corruption, dictatorial decisions and political concessions.”Wala’ Sameeh, from the Gaza Strip, wrote on Twitter: “Rajoub does not represent me. He has disappointed the Palestinian people.”Blogger Muhammad Abu Allan pointed out that Rajoub has left many Palestinians deeply disappointed.Another blogger, Eid Shkhaidem, commented: “As long as there are collaborators like Jibril Rajoub and [PA President] Mahmoud Abbas, Palestine will never be liberated.”The Popular Front for the Liberation of Palestine called for an immediate investigation into Rajoub’s decision, which it described as a “severe blow to the blood of our martyrs, prisoners and patients.”Rajoub’s decision “beautifies the ugly face of occupation and exonerates it from crimes against our people,” the PFLP said. The decision was a blow to pro-Palestinian activists and organizations working to promote boycotts, divestment and sanctions against Israel, it added.Palestinian columnist Emad Abu al-Rus wrote that he was not surprised by Rajoub’s “light-hearted” move to drop the demand to have Israel suspended from FIFA.“Rajoub was never a real athlete or a general,” Abu al-Rus remarked. “This is a man who never completed his high school studies.”He and other Palestinians pointed out that Rajoub was one of the first security commanders to conduct security coordination with Israel after the signing of the Oslo Accords and the establishment of the Palestinian Authority. Rajoub, who served more than 16 years in Israeli prison for terrorism-related activities, was the first commander of the PA’s Preventive Security Service in the West Bank.Another columnist, Hashem Khalidi, said he too was not surprised by Rajoub’s decision.“Those who know his history are aware that Rajoub had sold his people to Israel when he was commander of the Preventive Security Service. This month represents only himself and not the heroic Palestinian people.”Hamas strongly condemned the decision to drop the anti-Israel motion, saying it showed the PA leadership’s true attitude toward Israel.Palestinians no longer trust the PA’s promises to file war crime charges against Israel with the International Criminal Court, Hamas spokesman Hussam Badran said.