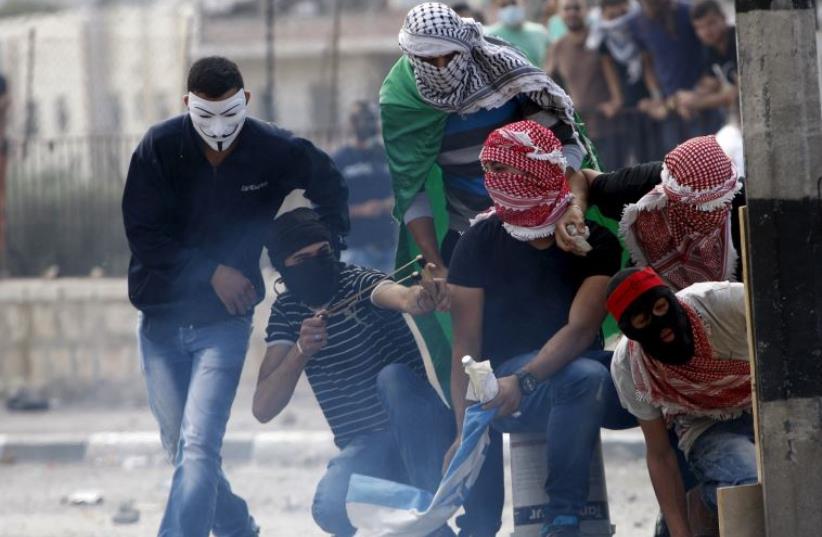 Palestinian rock-throwers attack Israeli troops near Bethlehem
(photo credit: REUTERS)
Advertisement
Palestinian songs glorifying violent attacks against Jewish Israelis have frequently been featured on Fatah-controlled government radio, Fox News reported Friday, promoting music containing lyrics such as “We’re going down from every house with cleavers and knives,” and 'With grenades we announce a popular war."Coinciding with a wave of terror that has rocked Israel over the last several weeks, leaving in its wake at least a dozen dead Israelis, songs exalting martyrdom and murder have taken over Palestinian airwaves, with the Palestinian Authority leadership doing little to stop the incitement.
Fatah video: "I"m coming towards you, my enemy...with cleavers and knives."
"The PA and Fatah movements use all the communications infrastructures at their disposal to fuel the incitement on official PA media, on PA TV, Fatah Facebook, and on Twitter," according to Nan Jacques Zilberdik, a senior analyst at Jerusalem-based Palestinian Media Watch."They [Palestinian leaders] say that all the terrorists are really just innocent Palestinian victims who were walking by Israeli soldiers on the way to school or on the way to the mosque, then Israel shoots at them and plants knives at the scene," Zilberdik added. Meanwhile, music videos uploaded to Youtube displaying montages of Palestinian youths stabbing Israelis, throwing rocks and rioting in the streets accompany songs that encourages its listeners to "Stab the Zionist and say God is Great.”Along with Palestinian radio, these anthems of incitement spread through social media, television and the black market, where street vendors sell the CDs for the equivalent of $2.50, Fox News added.