The company says it is not responsible for what Israel does with its army dogs. 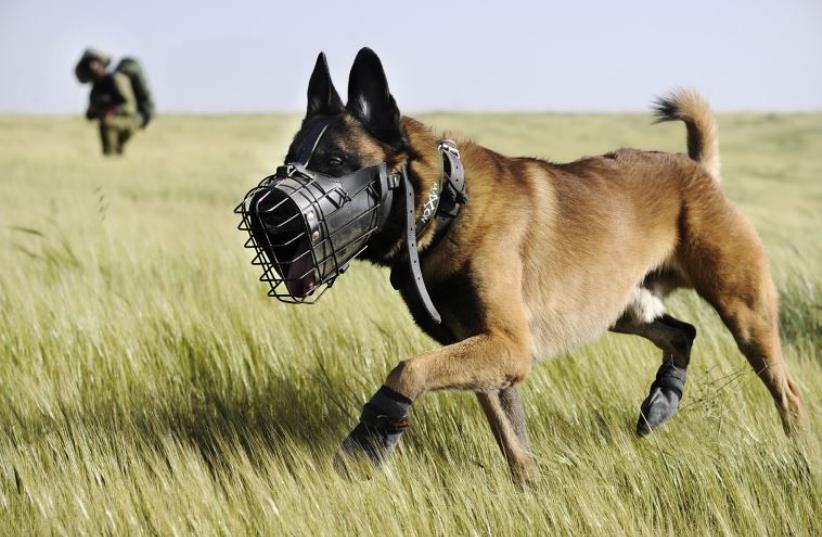 IDF search dog serving in the Oketz unit
(photo credit: IDF SPOKESPERSON'S UNIT)
Advertisement
AMSTERDAM — A 19-year-old Palestinian man is suing a Dutch dog breeder who sold a dog to the Israeli army that the claimant said bit him during a riot in the West Bank.Hamze Abu Hashem was bitten in 2014 while throwing stones at Israeli soldiers, according to the Telegraaf daily’s report Thursday on the unusual lawsuit. He sued the Four Winds K9 dog breeding company in the southern Netherlands for $13,500 in damages.The company says it is not responsible for what Israel does with its army dogs.Liesbeth Zegveld, Abu Hashem’s attorney in the Netherlands, told the Algemeen Dagblad daily that the money is for psychological damage sustained by her client. She is also seeking an injunction outlawing the sale of dogs to Israel.“My client bears serious scars that will remain with him for the rest of his life,” Zegveld told the daily. “He is also deeply traumatized by the attack. He shakes when he hears dogs barking, he is too afraid to sleep and suffers from sleepwalking.”Abu Hashem was imprisoned for three months for throwing stones at Israeli soldiers.