A 14-year-old minor was caught attempting to jump over a turnstile at the security checkpoint. 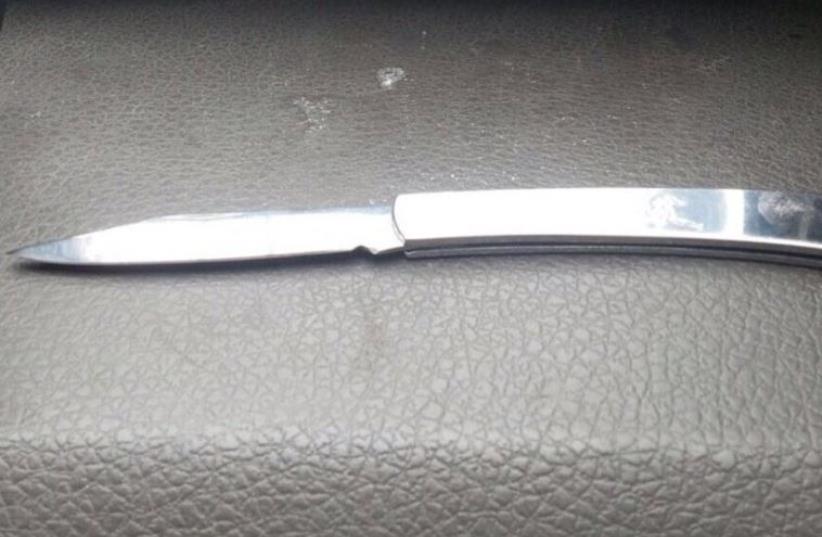 Police arrest Palestinian suspect at Shuafat crossing with hidden knife, March 16, 2016
(photo credit: POLICE SPOKESPERSON'S UNIT)
Advertisement
A 14-year-old Palestinian boy from the capital’s Shuafat refugee camp was arrested on Wednesday morning after attempting to climb over the security fence at Shuafat to allegedly carry out a stabbing attack in Jerusalem.According to police spokesman Micky Rosenfeld, the youth was initially identified by area intelligence personnel, who promptly alerted Border Police officers manning the nearby checkpoint.“He was immediately detained and arrested for attempting to climb the security fence with a knife hidden in his clothing,” said Rosenfeld. “During questioning by police he admitted to planning to carry out an attack in Jerusalem.”None of the officers was wounded during his arrest, he added.“This is yet again another terrorist attack stopped by police who have heightened security throughout the different neighborhoods of Jerusalem, with an emphasis on the city center, public areas and the Old City,” Rosenfeld said.Wednesday’s arrest follows a thwarted stabbing attack planned by two Palestinian women at Hazeitim checkpoint in east Jerusalem on Monday night.According to police, the suspects – both from Abu Dis and aged 24 and 29 – hid knives in their bags. When security personnel found the weapons, the women confessed to attempting to travel to the capital to stab Jews.Rosenfeld praised the police, who remain hyper-vigilant in the face of a nearly six-month-long unabated terrorist wave primarily carried out by minors, which many have deemed a third intifada.“The Border Police, in conjunction with the Military Police, act with determination and professionalism in order to keep the capital safe on a daily basis,” he said.“Their alertness enabled the arrest to take place without casualties, and prevented the suspects from entering Jerusalem.”