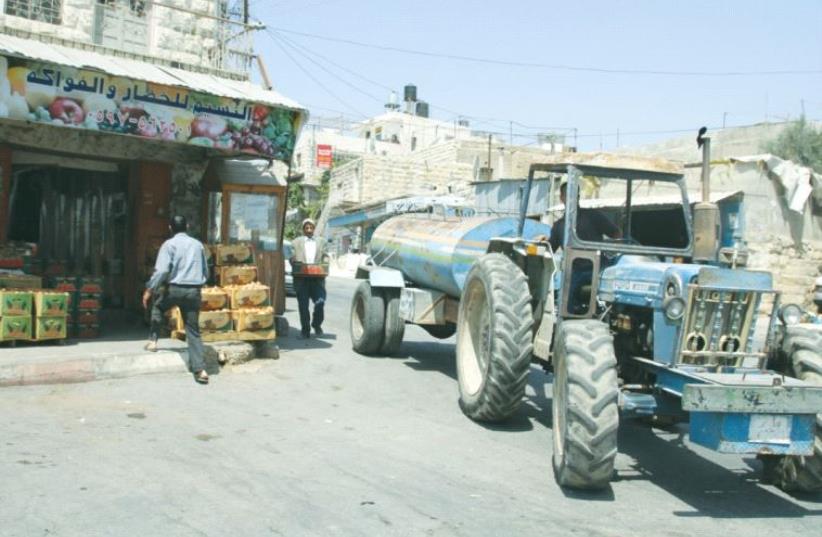 A TRACTOR carries water in the village of Sa’ir earlier this month.
(photo credit: TOVAH LAZAROFF)
Advertisement
The Palestinian Water Authority and the Sa’ir Municipality are at odds over the disappearance of large amounts of water from Sa’ir, a town of 25,000 northeast of Hebron, as the region experiences water shortages.
The PWA, which coordinates and regulates the distribution of water in the Palestinian territories, said in an August 12 statement that it had uncovered an ongoing water-theft operation in the village.
A number of Sa’ir residents have long made illegal openings in the village’s pipes, diverting water without the knowledge of the water authority. However, in this case, the authority accused the Sa’ir Municipality of being behind the theft and, in coordination with the Palestinian Customs Authority, arrested 13 municipal employees, including Mayor Kayed Jaradat. 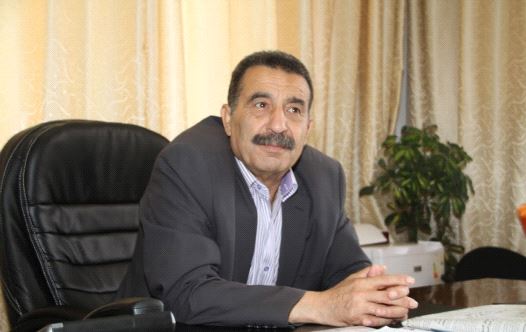 Mayor Kayed Jaradat. Photo by Tovah Lazaroff
“The Palestinian Water Authority seized an illegal attachment to the main water pipes in the Hebron governorate… which has affected the amount of water provided to other areas in the Hebron region,” the August 12 statement read.
In response to the arrests, on August 18, hundreds of Sa’ir residents demonstrated outside the municipality and blocked the Nabi Yunis road, the main passageway from Sa’ir and other villages into Hebron.
Following the demonstrations, PA Prime Minister Rami Hamdallah intervened and ordered Hebron’s prosecutor-general to release the mayor and other municipal employees.
Jaradat, a top Fatah leader and former Palestinian ambassador to two African countries, on Thursday denied the charges to The Jerusalem Post in his office in the Sa’ir Municipality.
“The accusation that the municipality has stolen water is completely false. Members of the municipality’s water department have never illegally diverted water,” he said.
The mayor admitted, however, that some residents do divert water illegally.
“I know that there are cases of theft, but none of them has involved municipal employees and, as a mayor, I do not have the tools to monitor them,” he said, calling on PA Hebron Governor Kamal Hamid to open an investigation to examine the facts about what is taking place.
Jaradat added that recent punitive measures taken against Sa’ir by the Water Authority are contributing to the water shortage.
“The Water Authority has lowered the water pressure in Sa’ir since the start of the most recent crisis, making it impossible to pump water to the more elevated parts of our village,” he said.
Sa’ir sits between a number of hills, and a majority of its residents live in elevated areas.
The water authority, which maintains that the Sa’ir Municipality is responsible for the water theft, did not respond to multiple requests by the Post for comment Meanwhile, Sa’ir residents, such as Ramzi Adnan, who works at a nearby quarry, just hope the two sides will overcome their differences and focus on resolving the crisis.
“I have no water in my house. I thought about showering with the water in the water tank near the quarry, but I was embarrassed to take a shower in front of my colleagues there,” said Adnan who told the Post he had not showered for three days.
Others have resorted to purchasing potable water from trucks from Hebron, while farmers have begun filling mobile water tanks with water from a spring in the village center.
The PA has called on Israel to increase the amount of water it allocates to local Palestinians, while Israel has said it provides double the amount of water stipulated in the Oslo Accords.