After being taken to an interrogation center in Hebron she admitted that she intended to use the knife to stab a female prison officer at Eshel prison. 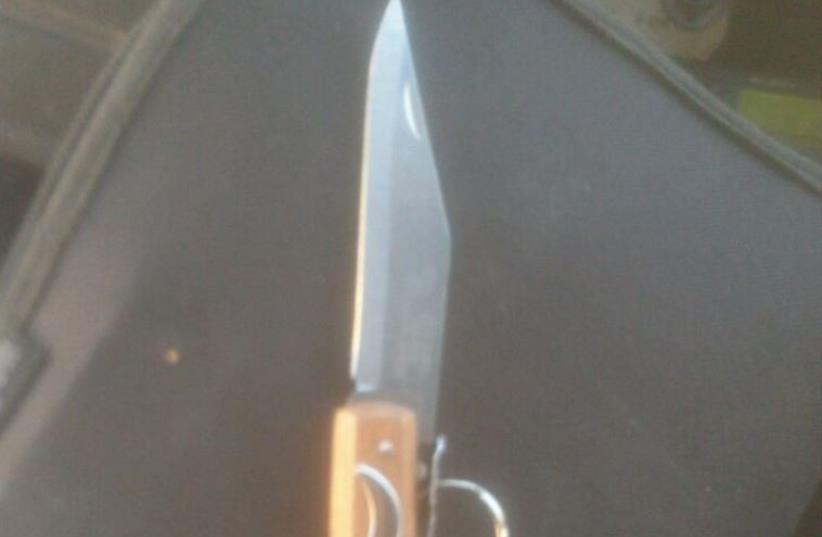 Knife belonging to young Palestinian who was detained at checkpoint.
(photo credit: Courtesy)
Advertisement
An unidentified Palestinian youth was detained Monday after admitting that she intended to use a knife, found in her hand bag during a search at a checkpoint, to commit a terror attack at an Israeli prison.The suspect, 17, who attempted to pass through a checkpoint south of Hebron, initially claimed that she forgot that the knife was in her possession and that its use was for cutting vegetables. Under interrogation in Hebron she admitted that she intended to use the knife to stab a female prison officer at Eshel prison, where her brother lectures inmates who are serving sentences for security related offenses. Tensions in the West Bank have been high since the murder of 18 month year-old Ali Dawabsha and his father, Sa'ad, by suspected far-right extremists last week. On Saturday Hamas publicly called for widespread attacks against Israelis."The murderous settlers will not be deterred unless we initiate attacks - do not wait for them to arrive in our villages and towns,"  said Hamas spokesperson Husma Badran.Since then several attacks have been carried out. On Sunday a 26 year-old Israel man was evacuated to Shaare Zedek Medical Center in Jerusalem after being lightly injured in a stabbing attack at a Dor Alon gas-station on highway 443. After arriving on the scene of the attack the IDF shot and killed the suspected Palestinian attacker. Police believe there are other suspects involved, however their status remains unknown.Last Thursday, a Palestinian struck and wounded three soldiers in a vehicular attack on route 60, near the Shiloh junction in the West Bank. Two of the soldiers suffered serious wounds in the attack and the Palestinian suspect and  was also seriously injured when his car flipped over. Both Islamic Jihad and Hamas, praised the vehicular attack, with Hamas spokesperson Abad Arahim Shadid calling it "an appropriate response to the arrogance of the enemy and its crimes against prisoners, al-Aksa mosque and babies."