The acknowledgment by the German government is believed to be the first Federal Republic public statement that the PA aids terrorists and their families. 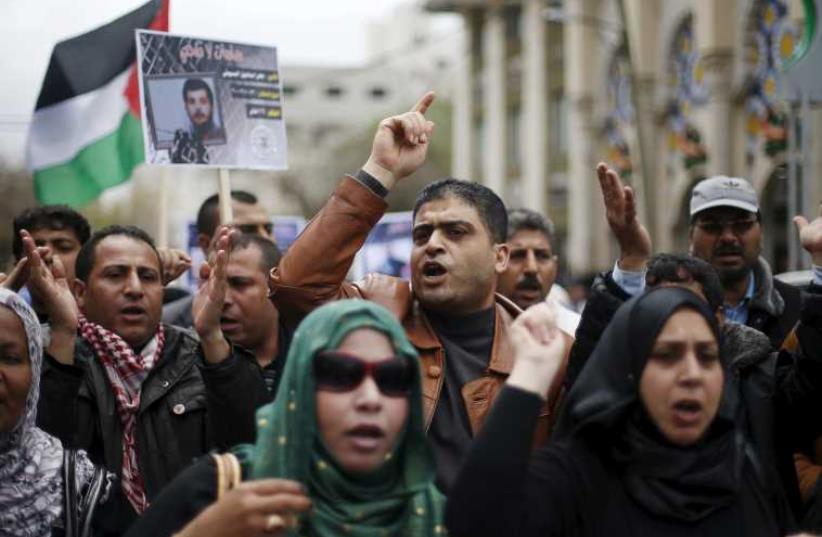 Prisoners Day
(photo credit: REUTERS)
Advertisement
Germany’s Foreign Ministry told the head of the German- Israel parliamentary group that the Palestinian Authority likely uses funds to pay terrorists and their family members, according to a September 1 letter.The acknowledgment by the German government is believed to be the first Federal Republic public statement that the PA aids terrorists and their families.Volker Beck, the German Green MP who secured the response in the September letter, said on Monday it is “good that the lack of willingness on the part of the federal government to know has now ended.Germany and the European Union must make clear to the PA , as well as the PLO, that payments to terrorists and their family members is unacceptable and cannot remain without consequences.”Maria Böhmer, a MP and under secretary in the Foreign Ministry, wrote Beck, “There are Palestinian institutions that issue payments to the families of those who were killed or injured, which includes family members of the perpetrators. “ She added , “family members from Palestinians who injured or killed Israeli security forces are supported... apparently from the budget of the Palestinian Authority.”She said Germany’s government does not contribute to these payments and funds projects for developmental aid. If there is confirmation that German public funds are funneled by the PA to terrorist activities, the federal government will contact the PA and its partners, Böhmer added.Critics argues the misuse of humanitarian aid incentives terrorism.Beck, who triggered the process to obtain the information, said the “payments to the family members of the murder of Hallel Ariel from an institution whose budget is financed by German taxpayers should not be allowed.”A Palestinian terrorist stabbed to death in June the 13-year-old Ariel as she slept.Beck said the best answer for the allocation of funds to the PA from the federal government is “trust is good, but verification is better.” He added, “Two weeks ago, the German government affirmed to have no knowledge of transfers to family members of the terrorists and remained silent about this in my questionnaire and conveyed to not know to the public.”Beck reference was to an ARD TV program on alleged German payments to terrorists in the PA. The German government told the ARD that it did not have knowledge about such payments.It is unclear why the foreign ministry’s walked back its lack of a response and affirmed that the PA is likely involved in financing terrorism.The federal government said in July in a response to a Beck inquiry that, “In 2015, bilateral support by the federal government for the people of Palestine and in UNRWA camps outside of Palestine (in other words in Lebanon, Jordan and Syria) totaled around €162 million.These funds financed specific projects, primarily in the areas of development cooperation, culture and education, along with humanitarian aid and civilian crisis prevention.German Foreign Minister Frank-Walter Steinmeier is a social democrat. His party’s SPD’s former general-secretary, Andrea Nahles, declared the formation of “shared values” between the Palestinian Fatah Party, which controls the PA, and the SPD. Nahles is currently in the government coalition and serves as the federal labor mninster.Beck said in 2014 he asked the Palestinian social minister at a luncheon meeting about the funds for terrorists. The minister abruptly ended the lunch, added Beck.