“Direct negotiations with Mr. Netanyahu in the past have proven to be fruitless; why repeat the same mistakes?" a spokesperson for the Palestinian prime minister said. 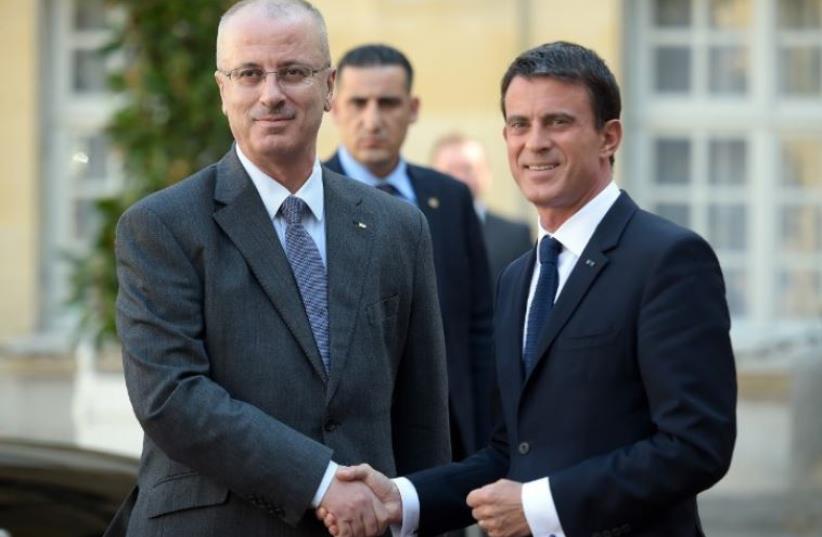 French Prime minister Manuel Valls (R) shakes hands with Palestinian prime minister Rami Hamdallah
(photo credit: AFP PHOTO)
Advertisement
The Palestinians on Monday rejected Prime Minister Benjamin Netanyahu’s call to hold direct talks in Paris under the auspices of the French government.“Direct negotiations with Mr. Netanyahu in the past have proven to be fruitless; why repeat the same mistakes?" said Jamal Dajani, the director of communications for Palestinian Authority Prime Minister Rami Hamdallah.“Actions speak louder than words," Dajani said. "Mr. Netanyahu's actions have shown that he's more interested in building illegal settlements than in reaching peace.” He spoke in advance of Hamdallah’s scheduled meeting in Ramallah on Tuesday morning with visiting French Prime Minister Manuel Valls, who is wrapping up a three-day trip to Israeli and the Palestinian territories.Valls' trip has focused on promoting economic ties with both governments as well as continued briefings about the new peace initiative his country is set to launch on June 3 in hopes of jumpstarting Israeli-Palestinian talks, which have been frozen since April 2014.Representatives from over 20 countries are set to gather in Paris on June 3 to plan for a large peace conference in the fall that would set the parameters for the renewal of talks to resolve the Israeli-Palestinian conflict. The Israelis and Palestinians are not invited to that initial meeting.Netanyahu has opposed the two-part French initiative, which he believes will simply dictate the outcome of the process and gives the Palestinians an excuse to avoid direct talks on a two-state solution.During his Monday meeting with Valls, Netanyahu urged his French counterpart to amend the initiative so that it instead becomes a platform for him and Abbas to hold talks in Paris without preconditions.“I'm ready to clear my schedule and fly to Paris tomorrow,” Netanyahu said, adding, “I will clear my calendar, and I hope that this is taken up by you and by the Palestinians.”Valls said he would present Netanyahu’s proposal to French President Francois Hollande.The Palestinians, however, prefer an internationalized process and as such have welcomed the French initiative.Dajani reiterated that sentiment on Monday night.  “Prime Minister Hamdallah welcomes the French effort to host an international conference in Paris aimed at reviving the peace process and hopefully the recognition of the State of Palestine,” he said.The Palestinians would like to see talks occur within internationally agreed upon parameters that set a timetable for an Israeli withdrawal to the pre-1967 lines and a halt to settlement activity, including Jewish building in east Jerusalem.The United States on Monday said it preferred to see the Israelis and Palestinians sit down together and talk, but that it did not believe such negotiations were possible at this time.“If they are willing [to talk], then certainly we are not going to stand in their way,” State Department deputy spokesman Mark Toner said.But, he cautioned, “We believe that there’s got to be more groundwork laid before that process can go forward.“We don’t want to see negotiations for the sake of negotiations. We want a clear path forward, and we need the – set the right climate or right environment for those negotiations to proceed,” he said.US Secretary of State John Kerry is expected to attend the June 3rd ministerial meeting.“He wants to work with the French. He wants to work with other partners in the coming days to ensure that this is as productive and constructive a process as possible,” Toner said.