Remarks by Palestinian Authority foreign minister come after Abbas address to African Union over the weekend. 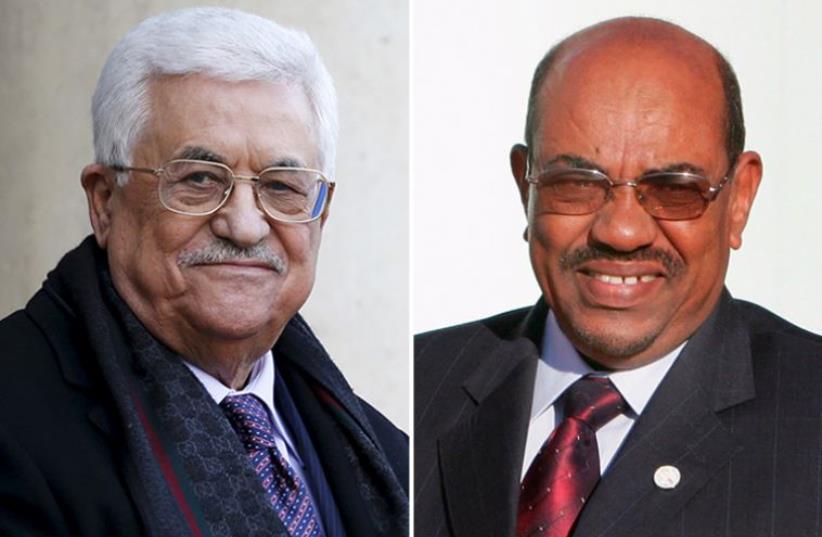 Abbas and Al-Bashir
(photo credit: REUTERS)
Advertisement
Palestinian Foreign Minister Riyad al-Maliki announced on Wednesday that the Palestinian Authority and Sudan are coordinating to “restrain Israeli movements” in the African continent.  “President Mahmoud Abbas and his Sudanese counterpart Omar al-Bashir discussed developing a strategy for the African continent and coordinating to restrain Israeli attempts to make a breakthrough in Africa,” the Palestinian foreign minister  told a group of journalists in Khartoum. On Saturday, Palestinian Authority President Mahmoud Abbas arrived in Kigali, Rwanda to deliver an address to the 27th Summit of the African Union. On Tuesday, the Palestinian Authority president landed in the Sudanese capital, Khartoum, for a three-day state visit, where he signed a number of agreements with Sudan, one of which establishes a mechanism for political consultations between the PA and Sudanese governments. Abbas will fly on Thursday to Paris to consult with French President Francois Hollande about the French initiative to hold an international peace conference and then complete his Africa tour, traveling to Mauritania for an Arab League summit early next week.Abbas’s visit to the African continent comes just over a week after Prime Minister Benjamin Netanyahu made an unprecedented trip to a handful of African countries.  During his trip, Netanyahu met with a number of African heads of state to discuss the development of economic, political, and security ties.