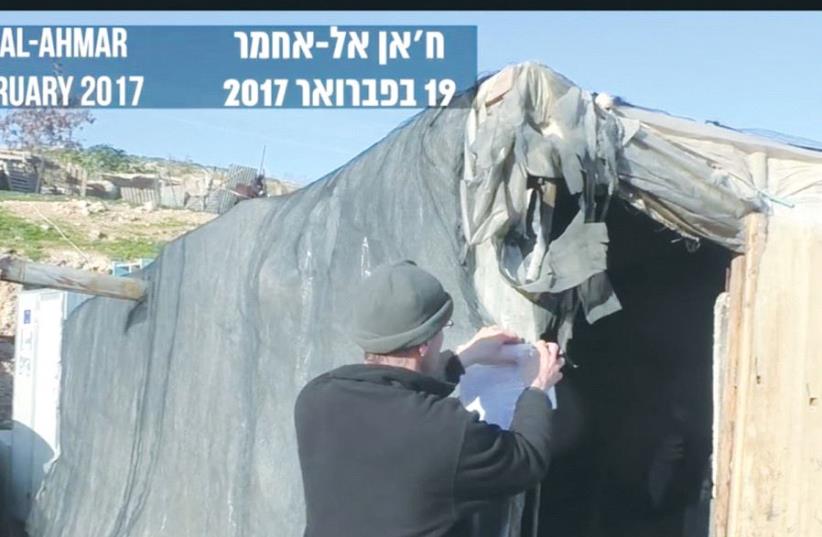 A COGAT OFFICAL pins a stop-work order, which in five days will become a demolition order, on an illegal building in al-Khan al-Ahmar in Judea yesterday.
(photo credit: FACEBOOK)
Advertisement
Palestinian Beduin plan to petition the High Court of Justice to halt the pending demolition of the herding village of al-Khan al-Ahmar.In a surprise move, the IDF issued stop work orders against any further construction or expansion of the 44 sheds and shacks that make up the village early Sunday morning. According the village’s attorney, Shlomo Lecker, the notices will become demolition orders in five days.The community, which is made up of 35 families, is located right off Route 1 in between Ma’aleh Adumim and Kfar Adumim in Area C of the West Bank.“This morning, construction termination warrants were served to illegal buildings in al-Khan al-Ahmar. The enforcement will take place in coordination with state directives and required legal certifications,” a representative of the Coordinator of Government Activities in the Territories unit, a branch of the Defense Ministry, said.According to Lecker, such demolition orders can only be issued if there is a relocation plan for the families.To the best of his knowledge, no such option exists at this time.Beduin in the area have long complained that very few building permits are issued to them, and none in al-Khan al-Ahmar.Settlers living nearby argue that the placement of the village, adjacent to Route 1, poses a security hazard. They are also concerned that the illegal building in the village is part of an organized plan by the Palestinian Authority to lay claim to portions of Area C, which is under Israeli military and civilian control.Al-Khan al-Ahmar spokesman Eid Khamis told The Jerusalem Post he fears the IDF could return to tear down their homes by the end of the week.“The Civil Administration arrived at 5 a.m. and surrounded the community, not allowing anyone to enter or leave. The soldiers then began distributing evacuation orders [saying] that we have to leave in the next five days,” he said. “We have no other choice but to deal with the fate of our community in the Israeli High Court.”He believes that the stop work orders are a part of plans to develop his community’s village for settlement use, including the controversial E1 area, which is part of the Ma’aleh Adumim settlement.“Why are my community’s homes, which were built a very long time ago, illegal, while the settlement nearby, which was built just a couple of decades ago, is legal?” he asked. “We will not leave; we will stay here.”Walid Assaf, chairman of the PA Commission Against the Wall and Settlements, told PA news outlet Wafa: “The occupation forces encircling the encampment entirely and distributing demolition notifications pertaining to homes and a school come as a part of a policy of ethnic cleansing that it carries out against Beduin encampments and E1 to annex the land east of Jerusalem for Israeli settlements.”Assaf added that the plan to demolish al-Khan al-Ahmar amounts to “a new Nakba” for its residents.“The council will expend all of its energy to strengthen the steadfastness of the al-Khan al-Ahmar encampment,” he said.The village is well known for hosting a regional school that is under the auspices of the Palestinian Authority. There is a standing demolition order against the school’s small, one-room adobe structures, which are made out of tires and mud.The High Court is debating the school’s fate, and no new demolition orders have been issued for the school. Lecker said the state is expected to submit its stance on the school to the court by February 26.