After Russia annexed Ukraine's Crimea peninsula in 2014, UEFA banned Crimean clubs from moving to the Russian league and instead authorized them to set up their own competition. 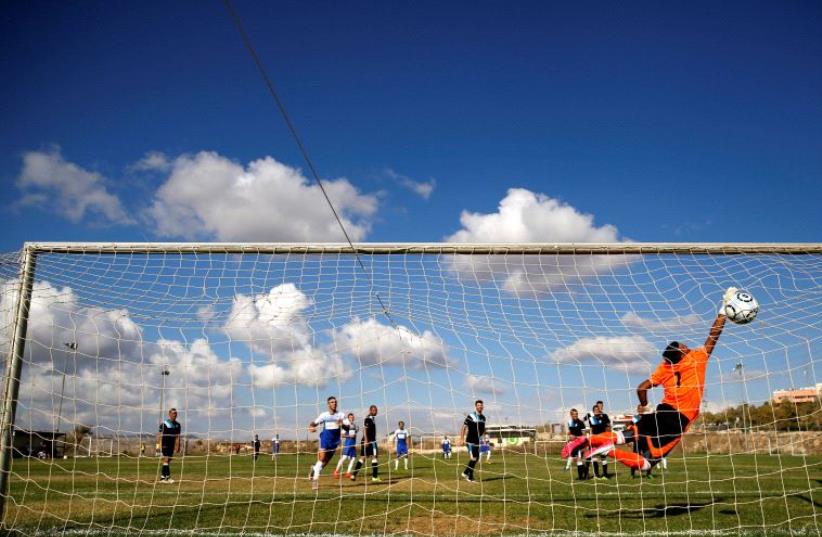 Match between Ariel Municipal Soccer Club and Maccabi HaSharon Netanya at Ariel Municipal Soccer Club's training grounds in the West Bank Jewish settlement of Ariel
(photo credit: REUTERS)
Advertisement
The head of the Palestinian Football Association (PFA) wants FIFA to adopt what he called a Crimea-style solution to prevent Israeli league clubs from being based in settlements in the West Bank, he said on Tuesday.After Russia annexed Ukraine's Crimea peninsula in 2014, European soccer body UEFA banned Crimean clubs from moving to the Russian league and instead authorized them to set up their own competition.PFA president Jibril Rajoub, speaking after a meeting of FIFA's Israel-Palestine Monitoring Committee, said a similar solution - whereby Israeli clubs based in settlements would be prevented from playing in the Israeli league but have their own competition - could work."Crimea is a good model and we believe that UEFA can play a good role," he told Reuters in a telephone interview.Israel is a member of UEFA, which was an observer at the meeting, while the Palestinians play in the Asian Football Confederation.At present, five Israeli clubs based in West Bank settlements play in the lower divisions of the Israeli league.All are minor, non-professional outfits from the West Bank settlements of Ma'aleh Adumim, Ariel, Kiryat Arba, Givat Zeev and Bikat Hayarden (Jordan Valley).Rajoub described Tuesday's meeting as "long, arduous and intensive" and said he expected FIFA to reach a decision at the next FIFA Council meeting in January. "We will accept no compromise," he said.The Israeli FA and FIFA could not immediately be reached for comment.The committee led by South African businessman and former political prisoner Tokyo Sexwale convened for the first time a year ago.It was set up following a heated exchange at the FIFA Congress in May 2015, when the PFA was persuaded to drop its proposal for a ban of Israel.Rajoub said restrictions on the movement of players between the Israeli-occupied West Bank and Gaza Strip continued to be an issue."The situation is going from bad to worse, nothing is changing," he said.Israel cites security concerns for the restrictions, and the Israeli FA has argued that it has no control over such matters, which fall under the jurisdiction of the security authorities.