The lawsuit is one of several in the United States seeking to hold groups, and sometimes the Palestinian Authority, liable for attacks attributed to Hamas. 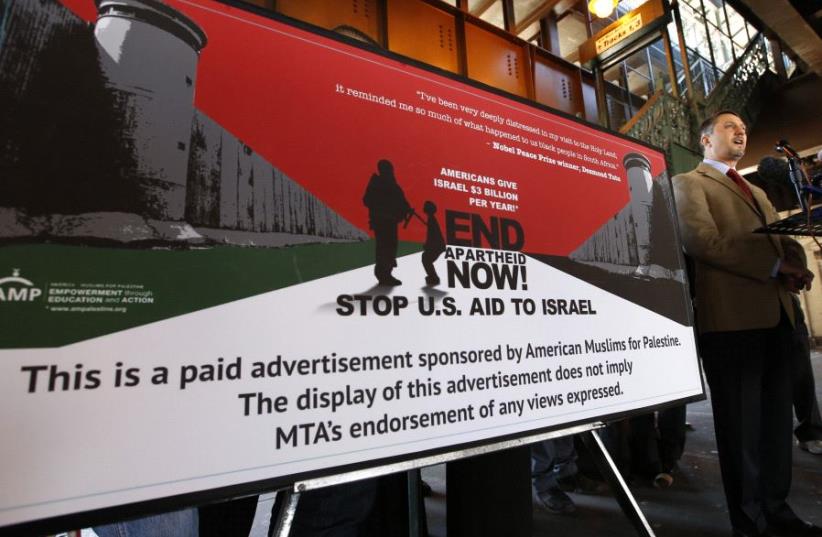 Dr. Hatem Bazian, Chairman of American Muslims for Palestine (AMP) speaks at a news conference next to one the organization's new advertisements at the Metropolitan Transit Authority (MTA) Harlem 125th Street Metro North commuter train station in New York City, March 26, 2013.
(photo credit: REUTERS)
Advertisement
An American couple whose teenage son was fatally shot in 1996 at a bus stop near Jerusalem on Friday filed a lawsuit to force a US-based Palestinian group to pay a $156 million judgment they obtained over the attack, which they blame on Hamas.Stanley and Joyce Boim called American Muslims for Palestine and its affiliated Americans for Justice in Palestine Educational Foundation the "alter egos" of now-defunct groups that a jury found liable in 2004 for the death of their 17-year-old son David."It's a frivolous lawsuit," AMP Chairman Hatem Bazian said in an interview. "They are using the Islamophobic environment we are in to try to tarnish and defame an organization that is in good standing, and has been working diligently to provide a perspective on the Palestine cause to the American public."The lawsuit is one of several in the United States seeking to hold groups, and sometimes the Palestinian Authority, liable for attacks attributed to Hamas, which the Department of State designates a foreign terrorist organization.In their complaint filed in Chicago federal court, the Boims said they have collected only a "small fraction" of the judgment, and the defendants should be held civilly liable for the rest under the federal Anti-Terrorism Act. The 7th U.S. Circuit Court of Appeals upheld the judgment in 2008."It never was their intention to get rich" from the lawsuit, which was designed to end funding of terrorism from the United States, the Boims' lawyer Stephen Landes, from the Locke Lord firm, said in an interview."The Anti-Terrorism Act can't be set aside simply by rebranding yourself," Landes said.AMP, founded in 2006, has said its mission is to educate Americans about Palestine and its heritage.Bazian said the group has "no relationship whatsoever with any group or organization outside the United States."In the 2008 decision, Circuit Judge Richard Posner wrote that Hamas has "engaged not only in terrorism" but also in providing health, education and other services.He said anyone who knowingly contributes to the "nonviolent wing" of a known terrorist group "is knowingly contributing to the organization's terrorist activities. And that is the only knowledge that can reasonably be required as a premise for liability."The case is Boim et al v. American Muslims for Palestine et al, US District Court, Northern District of Illinois, No. 17-03591.