Planning under way for new Jewish building in Hebron

The possibility of building a 28-unit apartment project at the site, was raised in May 2014 by the Ministry of Construction and Housing. 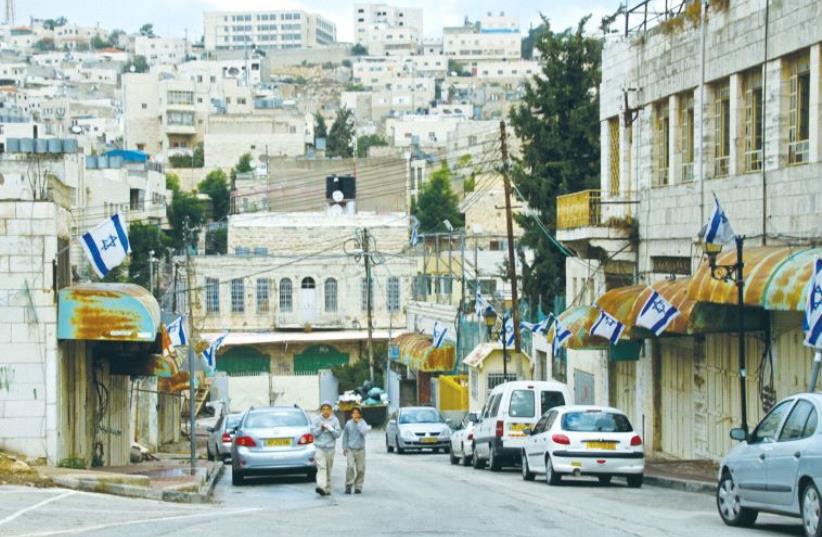 BOYS WALK up a street last winter near Hebron’s yeshiva, close to where the proposed Jewish building would be.
(photo credit: TOVAH LAZAROFF)
Advertisement
The IDF gave a nod in the direction of new Jewish building in Hebron when it gave the settlers there permission to plan infrastructure for permanent housing in a small compound near the city’s yeshiva.Six families now live in caravans in the “Metkanim” compound, that is also used by the military.The possibility of building a 28-unit apartment project at the site, was raised in May 2014 by the Ministry of Construction and Housing, which brought the matter to the attention of the Justice Ministry.The Metkanim compound is considered to be state property and had been under the auspices of the Custodian for Abandoned Properties, a source in the Justice Ministry told The Jerusalem Post.It had rented the compound to the Palestinian municipality of Hebron, which in the past, used it as a bus station, the source said.The municipality’s contract had ended, which allowed the state and the IDF to begin planing for a residential project, the source said. The land in question was formerly owned by Jewish residents of the city who fled after the 1929 massacre, explained former MK Orit Struck of the Bayit Yehudi party, who is a resident of Hebron.After the War of Independence in 1948, the property rights passed to the Jordanian government, which ruled the area until the Six Day War, she explained.Hebron’s Jewish community spokesman Noam Arnon, said he is skeptical that the government would risk international ire and grant such approvals.“This is a government that caves under pressure,” Arnon said. As a result, the chance for success here is very low, he added. Still the Coordinator of Government Activities in the Territories told The Jerusalem Post on Monday that, “Permission to plan infrastructures was granted in accordance with such procedures and the approval and coordination of the Ministry of Justice.”A Justice Ministry source added that for the matter to move forward, it would need approval for the upper political echelon. At which point, more planning work would be needed.New government-approved Jewish housing in the city of 215,000 Palestinians and less than 1,000 settlers is rare.The last such project was a small apartment building for eight families, named Beit Menachem, in the Tel Rumaida area of Hebron.Plans for that project began in 1998 and building was finished only in 2005, Arnon said.“But as we speak work is under way for 100 buildings for Arabs,” he said.In the past decade the Hebron Jewish community has attempted to expand its property by purchasing buildings or constructing new ones and pushing government for approval.In 2007, the Hebron Jewish community purchased a four-story apartment building, but was granted permission to move families into the structure only in 2014, once a lengthy court proceeding was completed.The community is now seeking approval for the purchase of another apartment building, the Beit MaMachpela.Jews have lived in Hebron almost continuously since the days of the Bible. The 1929 Arab riots, in which 67 Jews were killed, devastated the community.Jews did not return to the city until 1979, a decade after the Six Day war.The city itself is divided, so that the bulk of it is under the control of the Palestinian Authority, while a small section that houses the Jewish community and the Tomb of the Patriarchs is under Israeli rule.