Palestinian officials are calling for an immediate halt to any form of Israeli-Palestinian meetings. 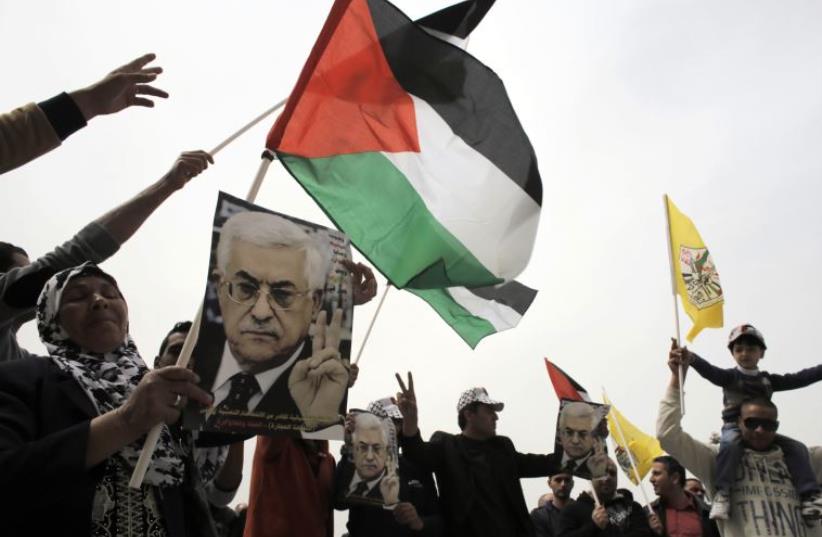 Palestinians hold flags and posters depicting PA Mahmoud Abbas during a rally in Bethlehem
(photo credit: REUTERS)
Advertisement
PLO leaders are scheduled to hold a meeting in Ramallah in the coming days to discuss reports about secret meetings between Palestinian and Israeli officials.Jamil Shehadeh, member of the PLO Executive Committee, said that he and his colleagues were surprised to hear about the meetings.“The Executive Committee will demand answers concerning the meetings with the Israelis,” Shehadeh said. He pointed out that the Palestinian leadership had decided to refrain from holding such meetings, especially in the aftermath of the “increased Israeli aggression against the Palestinians.”Shehadeh claimed that under the current circumstances the Israeli government would not meet any of the Palestinian conditions for the resumption of the peace talks, particularly a full cessation of construction in settlements and the release of Palestinian prisoners.“The next meeting of the PLO Executive Committee will be an important one,” he said. “We will discuss a number of issues, including the latest developments in the Palestinian arena, reconciliation between Fatah and Hamas and international efforts to revive the peace process.” He did not say when the meeting would take place.Another senior PLO official, Tayseer Khaled, called on Tuesday for an immediate halt to Israeli-Palestinian meetings, which, he said, were taking place behind the back of the Palestinian leading institutions.Khaled complained that the secret meetings, especially the last one between PLO Secretary-General Saeb Erekat and Interior Minister Silvan Shalom in Jordan, were in violation of decisions taken by the PLO Executive Committee and Central Council.He noted that the two PLO bodies had emphasized that the resumption of the peace talks requires an Israeli commitment to stop all settlement activities in the West Bank and Jerusalem and honor international laws and resolutions.Khaled said that the secret meetings cause grave damage to the interests of the Palestinians and offer a free service to the government of Prime Minister Benjamin Netanyahu “which is facing international pressure and isolation.”