Joint List MK Ahmad Tibi asked Netanyahu if the bill would apply to the Duma killer, and the PM responded: “In principle, yes.” 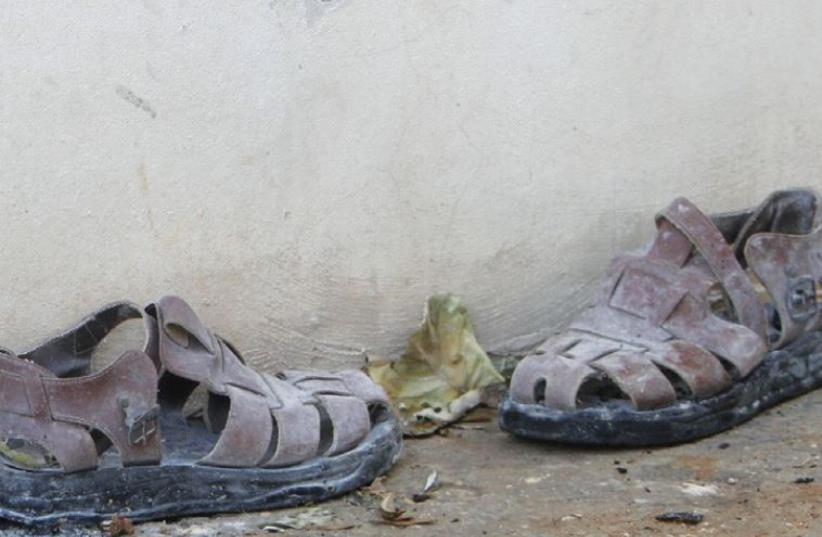 A PAIR of slippers is seen outside a house that had been torched in a suspected attack by Jewish extremists in Duma.
(photo credit: REUTERS)
Advertisement
The Jewish Israeli who firebombed a Palestinian home in Duma, killing a baby and his parents, deserves capital punishment, Prime Minister Benjamin Netanyahu said during a Knesset debate on Wednesday.Netanyahu defended legislation that would make it easier for a military court to sentence terrorists to death.Joint List MK Ahmad Tibi asked Netanyahu if the bill would apply to the Duma killer, and the prime minister responded: “In principle, yes.”Amiram Ben-Uliel was indicted in January 2016 on three counts of murder, attempted murder, arson and conspiracy to commit a racially motivated felony, for the arson attack on the home of the Dawabsha family in July 2015 that killed Ali, 18 months, and his parents, Sa’ad and Riham. A minor whose name is under a gag order was also charged.Two years later, a verdict has yet to be issued for Ben- Uliel. Hearings have been held behind closed doors, at the Shin Bet security agency’s demand.Opposition leader Isaac Herzog (Zionist Union) asked Yisrael Beytenu MK Robert Ilatov, who proposed the death penalty bill, if it would apply to the killer of Muhammad Abu Khdeir, a Palestinian teen who was murdered and burned to death in 2014.Ilatov responded that yes, “A terrorist is a terrorist.”However, Abu Khdeir’s murderer, Yosef Haim Ben-David, was already convicted and sentenced to life in prison.