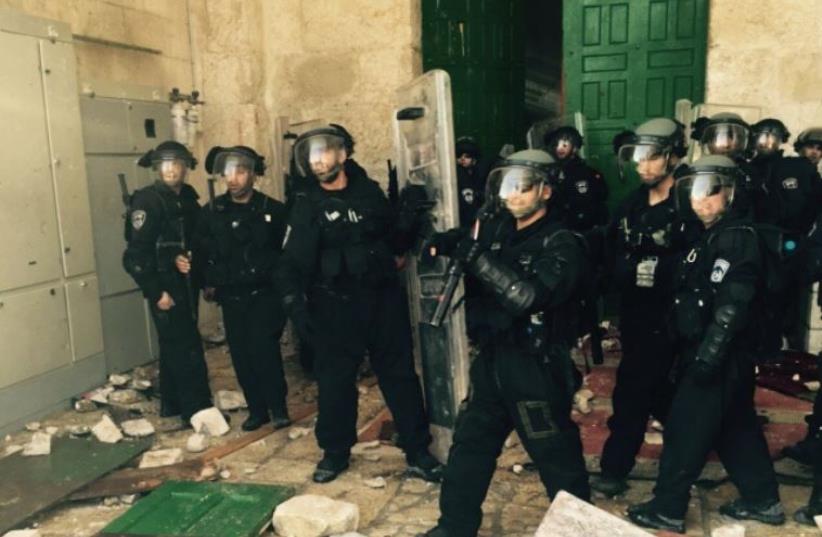 Riots at Temple Mount
(photo credit: ISRAEL POLICE)
Advertisement
Following several days of rioting on the Temple Mount last week, police have arrested 58 Arab suspects who attacked Jewish visitors and the officers protecting them, police announced on Sunday.The majority of the suspects were identified by police via CCTV footage, which showed the perpetrators’ attacks over three consecutive days that resulted in a temporary suspension of non-Muslim visitors last Wednesday, police said.Police made the decision to suspend visitation after security assessments indicated it was no longer safe for Jews – who were targeted with rocks and other debris – to enter the contested compound. No injuries were reported, and 10 arrests were made on site.Many of the masked Muslim assailants carried out the attacks near al-Aksa Mosque, where they slept and stockpiled an arsenal of stones and other objects, knowing that officers are not permitted to enter the mosque, police said.Indeed, video of last week’s violence shows teens and young men barricading themselves in the mosque with apparent immunity after hurling a hail of rocks at Jewish visitors and police.According to police spokesman Micky Rosenfeld, the majority of suspects were arrested in the east Jerusalem neighborhoods where they reside.“The investigation is based on CCTV footage of the disturbances that took place,” said Rosenfeld on Sunday. “Jerusalem police operations are continuing around the Temple Mount area and different Israeli-Arab neighborhoods, in order to find the suspects responsible for the disturbances on the Temple Mount over the past few days.”He added that police will continue to make arrests until all the suspects are accounted for, and that the site will remain closed to non-Muslim visitors pending ongoing security assessments.Deputy Knesset Speaker MK Nava Boker (Likud) condemned the decision to close the Temple Mount to non-Muslim visitors as rewarding terrorists.“The police gave a prize to terrorism, and instead of punishing the Arab rioters, they are punishing the Jews who act legally,” Boker said.Deputy Defense Minister Eli Ben-Dahan (Bayit Yehudi) echoed Boker’s sentiments.“Again, we see the same chronicle, where Muslim worshipers desecrate the sanctity of the Temple Mount by the use of violence, and those who pay the price are law-abiding citizens: Tourists and Jews, who just want to make a pilgrimage to the Temple Mount,” he said.Jerusalem Mayor Nir Barkat issued a statement supporting the police’s decision as a prudent safety measure to maintain the site’s delicate status quo, but also warned against allowing violence to dictate policy.“Israeli police must be allowed to do its work and continue to maintain the status quo on the Temple Mount,” Barkat said. “Yet we must not make decisions under the pressure of violent riots.”While right-wing critics accused police of acquiescing to terror, Dr. Meir Margalit, former east Jerusalem portfolio head and Meretz city councilman, praised the decision to temporarily ban non-Muslim visitors as appropriate, given the capital’s currently explosive environment.“It’s the right thing to do, and I’m sorry it came so late,” he said on Sunday. “They knew during this period that Jewish attitudes toward entering the Mount is dangerous and provocative, and will cause trouble. They know it from other years, so why couldn’t they [have implemented the ban] from the beginning? But it’s better late than nothing.”Ramadan concludes on Tuesday.