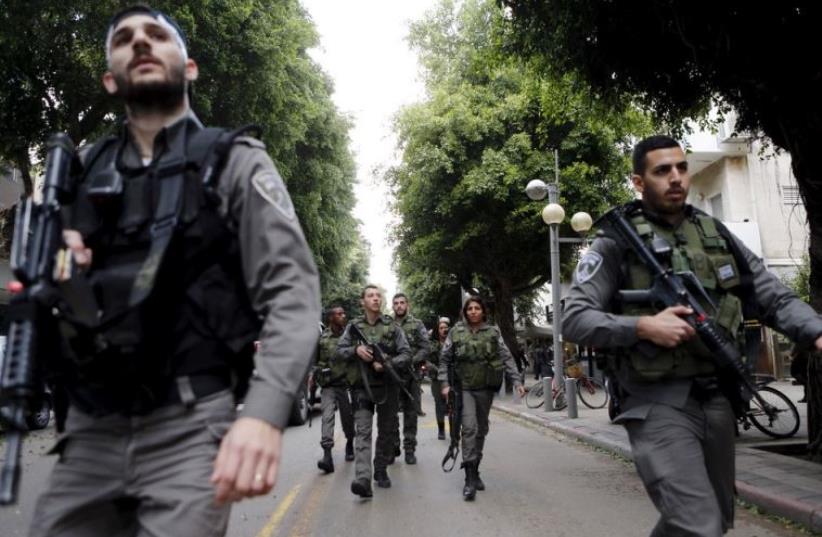 Israeli border police guards secure near the scene of a shooting incident in Tel Aviv
(photo credit: REUTERS)
Advertisement
Officials boosted security throughout Tel Aviv and the surrounding region on Friday after an assessment of the current situation, following an entire week of fruitless searches for the gunman who killed three in central Tel Aviv on January 1. Security officials decided to beef up patrols and manpower in city, but said there was no specific warning of a terrorist loose in city.Large forces of police were also deployed in the North of the country on Friday in the Wadi Ara area after receiving new intelligence information about a possible alternative escape route Tel Aviv shooting suspect Nashat Milhem may have taken. Meanwhile, police forces erected checkpoints around the Sharon region, including along a number of the areas on main roads. Arara resident Milhem is suspected of shooting and killing Alon Bakal, 26, from Karmiel, and patron Shimon Ruime, 30, from Ofakim at a crowded bar on Dizengoff in Tel Aviv last Friday. Milhem is also believed to have murdered a third victim, taxi driver Ayman Shaaban, from Lod, after the alleged shooter hailed a cab near the scene of the attack and had Shaaban drive him to an open area near the Glilot Interchange. On Thursday, the Haifa Magistrate's Court extended by three days the police custody of the Milhem's father, Muhammed.Police arrested  Muhammad Milhem on Tuesday on suspicion of being an accomplice to the New Year's Day attack. In addition to the father who had served as a police volunteer and initially identified his son to authorities, the court also extended the remand of a brother and another relative of the suspected gunman.Ben Hartman and Noam Amir/Maariv Hashavua contributed to this report.