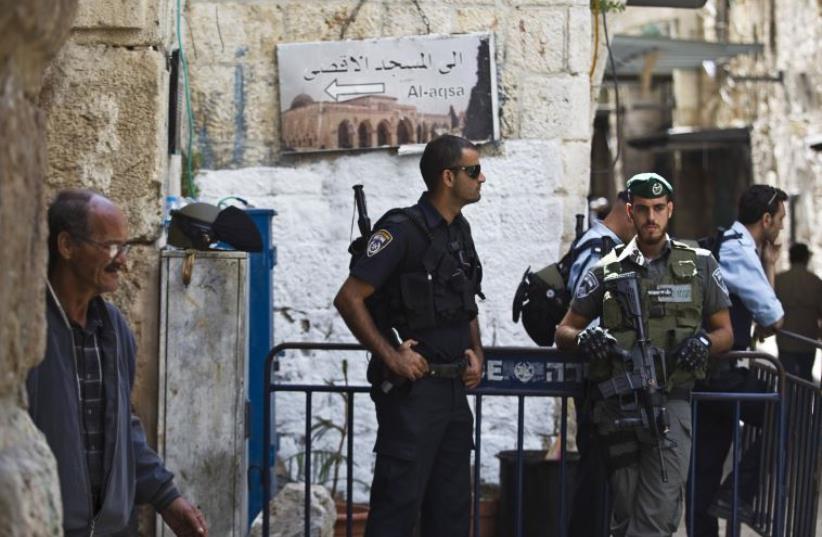 Police officers stand guard at an entrance to Al-Aksa mosque on the Temple Mount in Jerusalem's Old City
(photo credit: REUTERS)
Advertisement
Jerusalem District Police foiled a would-be attacker’s plans to stab citizens and security officials last week, security authorities said on Wednesday.During routine operational activity in the Old City on August 8, police officers noticed a suspicious man and detained him, a police spokesman said.In a preliminary interrogation, the suspect, a 26-year-old Hebron resident, claimed he had entered Israel in order to pray.
Police investigators suspected the man was hiding something, and after questioning his intentions, decided to transfer the investigation to the central unit.As the investigation progressed under a gag order during the last few days, police said they used a number of interrogation methods that exposed the suspect’s true intentions. He allegedly entered Israel illegally armed with a knife and a tear gas canister in the hope of stabbing civilians and security forces in Jerusalem.
The tear gas canister from a thrwarted terror attack (Credit: Israel Police)
The court extended the suspect’s remand until August 20 in order to complete the investigation.“There no doubt that the arrest of the suspect and exposure of his intentions prevented an attempt to carry out a terror attack in the Jerusalem area which could have had a severe outcome,” police said on Wednesday morning.
The knife from a thrwarted terror attack (Credit: Israel Police)"The efforts to locate, prevent and thwart attempts by terrorists and terrorist organizations to carry out attacks are ongoing all the time in Jerusalem and at the crossings surrounding Jerusalem, and the arrest of the suspect is a central and added element to the smart and focused operational activity that is being carried out all the time," the police added.