Despite the harsh measures taken in the past week against suspected Jewish terrorists, the law still continues to discriminate between Israelis and Palestinians. 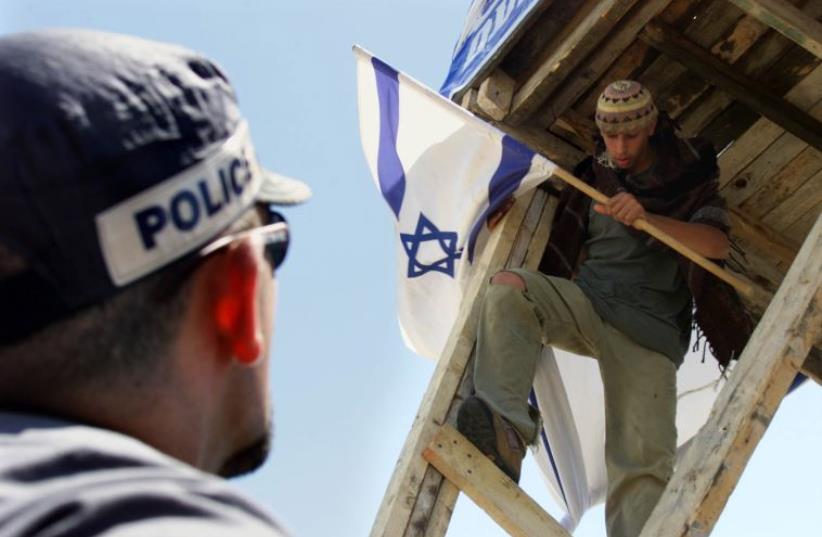 An Israeli policeman tries to talk a young Jewish settler to come down from a tower near Efrat
(photo credit: REUTERS)
Advertisement
It seems that the Shin Bet security service, the police and the IDF, backed by the cabinet, are shifting gears in the battle against Jewish terrorism and political violence.The joint raids by these law enforcement agencies in two illegal posts in the West Bank – one of them close to the village of Duma where a firebombing more than a week ago killed a toddler and his father – which included house searches, arrests of suspects required for interrogation, and administrative detainment of two other suspects, indicate that the Israeli government at last understands the danger that Jewish terrorist cells pose, not only to the Palestinians, but also to the very foundations of the Jewish state.
Jewish extremism expert discusses radicalism
The two posts Adei Ad and Baladim are considered to shelter the hard core of the hundred or so suspects belonging to the Jewish terrorist networks.The warrants for administrative detention signed by Defense Minister Moshe Ya’alon on the recommendation of the Shin Bet were issued against Evytar Slonim and Meir Ettinger.Last week the first suspect was put under administrative detention for his supposed involvement in the arson of the Church of Loaves and Fishes in the Galilee in June.Ettinger, the grandson of the racist outlawed Rabbi Meir Kahana, who was murdered in 1990 by a Palestinian gunman in New York City, is considered the undisputed ring leader of the Jewish terrorist cells that have murdered and injured Palestinians, damaged their property, and torched their fields and mosques, as well as churches in Israel.Slonim is supposedly a senior operative in the unnamed group that, in its manifesto, outlines a rebellion against the state of Israel as a free democratic state. Practically, however, its aim is to provoke violent escalation that would force Israel to respond with more violence.The goal of the various measures taken by the authorities against the Jewish terrorists is threefold.First, it is to make life difficult for them to move and live freely and to make them realize they are under constant supervision. But they also have an operational goal in hoping that searches will produce evidence to implicate the suspects. Nevertheless, the administrative detention also has another purpose – to distance leaders and senior operatives from their soldiers, and thus prevent future plots and operations that might be authorized by the leaders.The use of administrative detentions is problematic in a democratic state, but Israel as a democracy also has to defend itself from those who try to exploit its values and spread political and ideological violence, whether they are Palestinians or Israelis.At the heart of the matter is the following problem.Despite the harsh measures taken in the past week against suspected Jewish terrorists, the law still continues to discriminate between Israelis and Palestinians.While Israelis, including those who live in the West bank, are under Israeli democratic jurisdiction, Palestinians in the West Bank are dealt with as residents living in war zones and occupied territory. Thus, Palestinian terrorist suspects are subjected to military courts, while Israelis to civilian courts; while harsh punitive measures such as demolishing houses are used against Palestinian terrorists, Jewish terrorists are immune from such measures.The above all aim of the recent steps ordered by the government is to do everything to prevent the eruption of a new Palestinian uprising.But it is clear to security experts that only the reigniting of the peace process will achieve it. Otherwise, it will be more of the same.