Pope Francis: ‘God promised the land to the people of Israel’ 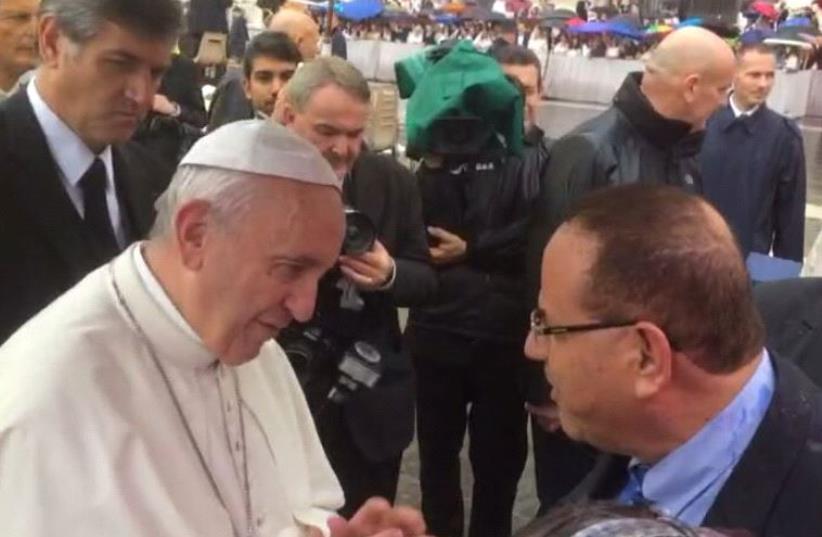 Pope Francis with Ayoub Kara at the Vatican on October 26, 2016
(photo credit: AYOUB KARA)
Advertisement
God promised the Holy Land to the people of Israel, Pope Francis said during a public address at the Vatican in Rome on Wednesday in a speech about migration.“The people of Israel, who from Egypt, where they were enslaved, walked through the desert for forty years until they reached the land promised by God,” he said.Pope Francis spoke just before granting a brief audience to Israeli Deputy Minister for Regional Cooperation Ayoub Kara to thank him for his efforts on behalf of the Church and Christians in Israel.
Israeli Envoy to UNESCO throws UN Jerusalem Temple Mount resolution into the trash
Kara told reporters he felt that the pontiff was sending a direct message to UNESCO, whose World Heritage Committee approved a resolution that ignored Jewish ties to the Temple Mount.When he spoke with Pope Francis he thanked him for his statement acknowledging Israel’s rights to the Holy Land. He added that there is no question that the resolution is harmful to Christians and the Scriptures because it “distorts historical and theological facts.”Kara is scheduled to meet on Thursday with Vatican Secretary of State Pietro Cardinal Parolin.Pope Francis has yet to issue a clear statement on UNESCO’s Jerusalem resolutions.After Wednesday’s passage of one such text, Knesset Speaker Yuli Edelstein wrote a letter to Cardinal Parolin in which he stated that UNESCO’s denial of the Old City of Jerusalem’s history is an affront to both Christianity and Judaism.Edelstein urged the Holy See to “use its best offices to prevent the recurrence of developments of this sort.”The resolution, Edelstein wrote, “is an assault on history and is deeply offensive to both Christianity and Judaism. The denial of the historicity of the two Jerusalem Temples and the Temple Mount as recounted in both the Old and New Testaments is a terrible indictment of the international community when repeatedly adopted by an important UN body.“The outrageous repudiation of the millennia-old bond between Judaism and its holiest shrines in Jerusalem is a blatant attempt to rewrite history,” he added. “The annals of both our religions cannot be erased by raised hands and counted votes.”Edelstein said the time has come for the international community to pass a resolution reaffirming Jerusalem as the holy city for the three major monotheistic religions, “a city where the two Temples stood and from which the Word of God was first promulgated to humanity by our prophets.”Education Minister Naftali Bennett called UNESCO’s decision “a denial of history, and history will erase the embarrassing decision.“One thing is permanent: Jerusalem is the capital of Israel forever. Therefore, my decision to suspend our activities with UNESCO stands. We will not cooperate with a body that denies the connection of the Jewish People with Jerusalem,” Bennett stated.Yesh Atid chairman Yair Lapid called the UNESCO decision “absurd,” saying it “isn’t only anti-Israel, it’s also anti-history.”Bayit Yehudi chairwoman Shuli Moalem-Refaeli said: “Arabs in Israel and abroad have a glorious record of harming Jewish, Christian and Muslim holy sites. They also have an impressive record of rewriting history in a way that shames international institutions.”If Arabs want to disavow the Jewish connection to the Temple Mount and Israel, they should take it one step further, she added: “If we were never here and Jesus was a Palestinian, then I suggest that UNESCO condemn the Palestinians for crucifying Jesus.”