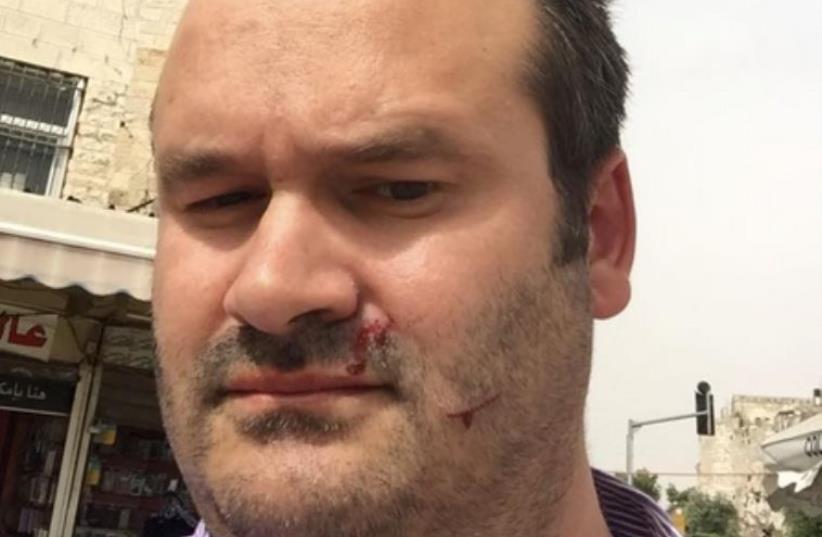 Opinion editor Seth Frantzman after being attacked in Jerusalem peace event
(photo credit: SETH J. FRANTZMAN)
Advertisement
The Jerusalem Hug event has been taking place for nine years.Participants gather around the Old City walls and walk hand in hand.
Brawl at the Jerusalem Hug event
However, this year’s event was disrupted almost before it could start by Palestinian activists from east Jerusalem who sought to prevent family members from attending by throwing water on people, pushing, shoving and assaulting those present.Unfortunately, one of those assaulted was this writer. Covering protests, demonstrations, riots and wars always puts journalists in a dangerous environment.In recent years in the West Bank and Jerusalem we have seen numerous incidents where reporters were in the line of fire, and in some cases purposely targeted.According to one of the Jerusalem Hug organizers, Vitali Markov, the event this year was to be attended by 250 Palestinians who had received permission from Israeli authorities to come from the West Bank to Jerusalem.Located between Damascus Gate and New Gate, the event was to begin at 3:30 p.m. at the Mishol Hapninim Garden, under the picturesque trees and walls of the Old City. Arab youngsters were practicing parkour and photographers had gathered to watch them. As if to coincide with the beginning of the event, several young men arrived and spoke to the Arabs who were participating, many of them wearing “Jerusalem Hug” shirts.They told the Arab participants to leave the “normalization event” and tried to pull a woman and her child.Arguments broke out and those with cameras were threatened by the Arab anti-normalization youths to delete film of them harassing the participants.Water was thrown at the people present. One of the young men hit me in the face while his friend tried to prevent me from leaving.Quds media, a Palestinian outlet, reported the disruption of the event as “youths trying to prevent the establishment of an effective normalization event near Damascus Gate near Al-Aksa Mosque.” Commentators on social media noted that the activists involved sought to “reject normalization” and called participants “donkeys,” accusing them of leading people “to storm Al-Aksa Mosque.”Some of those who hoped to participate in the event left following the disturbances and the police’s arrival.An east Jerusalem family wearing the “Jerusalem Hug” shirts left. But others pushed on undeterred.“Instead of violence we are still here and will bring our message of nonviolence,” said Markov. “Many beautiful people are here, we are continuing.”Police detained two of those involved in disrupting the event and investigations were ongoing as of press time. According to police spokesman Micky Rosenfeld, the police arrested one person.