The video concludes with the statement, “Open your eyes, terrorism rules Gaza.” 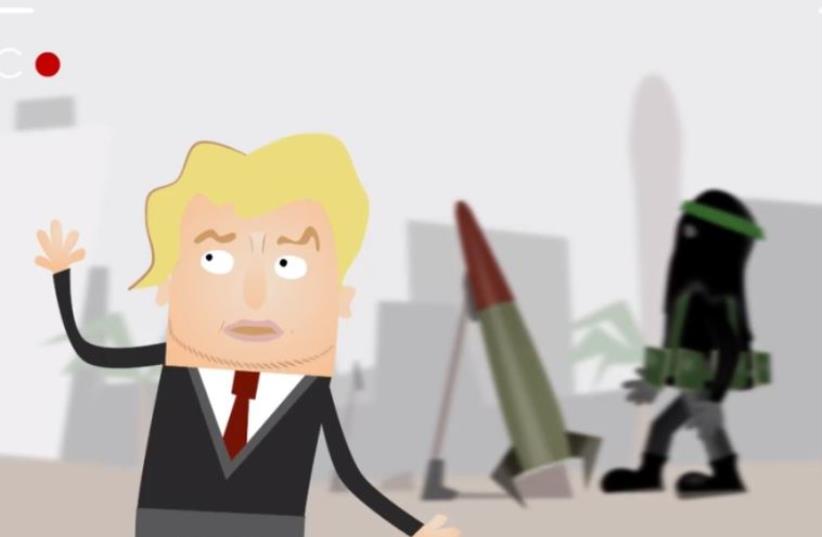 Foreign Ministry cartoon satirizes coverage of Gaza
(photo credit: COURTESY FOREIGN MINISTRY)
Advertisement
The board of the Foreign Press Association criticized the Foreign Ministry Tuesday for producing a cartoon mocking the foreign media’s coverage of last summer’s war in Gaza.The video, posted to Youtube by the Foreign Ministry, depicts a blond, seemingly American reporter in Gaza who appears to be oblivious to rockets being launched behind him as he claims, “There are no terrorists here, just ordinary people.”According to the association statement, the 50-second video is an attempt to ridicule journalists reporting on the conflict.In another scene, the reporter says before the camera: “Hamas allows everyone to live in dignity” as a Hamas member is shown throwing a bag over a man’s head while arresting him.The woman behind the camera then appears, handing the reporter a pair of glasses, and says, “Maybe now you’ll see the reality of life under Hamas rule.”The reporter puts the glasses on and immediately faints in reaction to what’s going on around him.The video concludes with the statement, “Open your eyes, terrorism rules Gaza.”At a time when Israel has serious issues to deal with in Iran and Syria, it’s worrisome that the ministry would spend its time producing the video, the association said in its statement.“Posting misleading and poorly conceived videos on YouTube is inappropriate, unhelpful and undermines the ministry, which says it respects the foreign press and its freedom to work in Gaza,” according to the statement.