Hundreds of anti-Israel demonstrators take to the streets in Australian city as PM makes historic visit Down Under. 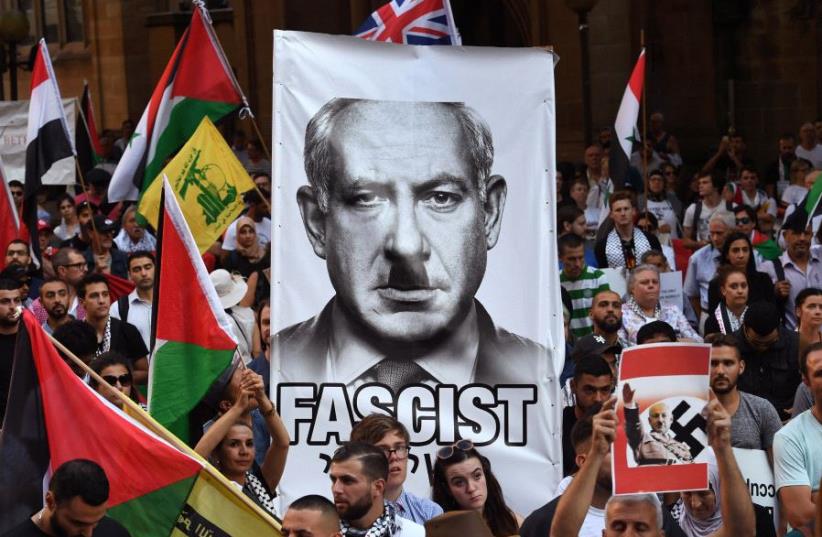 Pro-Palestinian protesters demonstrate against the visit to Australia by Israel's Prime Minister Benjamin Netanyahu, in Sydney on February 23, 2017
(photo credit: WILLIAM WEST/AFP)
Advertisement
Despite the Australian government's warm welcome this week for Prime Minister Benjamin Netanyahu in the first visit of an acting Israeli premier Down Under, hundreds of pro-Palestinian demonstrators took to the streets in Sydney on Thursday to protest against the visit.Among swaths of Palestinian flags and signs calling to "end the occupation," anti-Israel protesters brandished a banner depicting Netanyahu with a mustache in the fashion of Adolf Hitler with the word "Fascist" written across the bottom of the placard.Others branded Netanyahu a "war criminal" and "terrorist" and bemoaned Canberra's strong ties with the Israeli government and prime minister.According to AFP, police helicopter hovered over the rally and authorities at one point blocked protesters attempting to march on Netayahu's hotel in central Sydney.Pro-Palestinian protesters demonstrate against the visit to Australia by Israel's Prime Minister Benjamin Netanyahu, in Sydney on February 23, 2017. (William West/AFP)Protests were expected ahead of Netanyahu's four-day trip to Australia which he launched on Wednesday.He was greeted with pomp, circumstance and a degree of public warmth from the host prime minister rarely displayed during Netanyahu’s trips abroad.
Netanyahu and Australian PM Turnbull discuss strengthening Israel, Australia ties on Feb. 23 (credit: REUTERS)
“We have so much in common – shared values, democracy, freedom, the rule of law. Two great democracies, one very small in area, one vast, but each of us big-hearted, generous, committed to freedom,” Australian Prime Minister Malcom Turnbull said at the outset of an afternoon press conference following his first of a number of meetings with Netanyahu. “Prime minister, you are so welcome here in Australia.” That welcome was seconded just an hour later by Bill Shorten, the head of the opposition, who delivered a very supportive address at a luncheon attended by Netanyahu, Turnbull and some 400 Israeli and Australian businessmen.The warmth of Turnbull’s reception was not relegated to the ceremonious welcome, however, as the Australian prime minister also penned an op-ed in Wednesday’s edition of The Australian under the headline “Israeli PM visit cements a warm, old friendship.”An excerpt from the strongly pro-Israel piece appeared on the paper’s front page, titled “Turnbull blasts UN over vote on Israel.”“My government will not support one-sided resolutions criticizing Israel of the kind recently adopted by the UN Security Council, and we deplore the boycott campaigns designed to delegitimize the Jewish state,” he wrote.Herb Keinon contributed to this report.