Netanyahu and the US envoy “discussed concrete measures that could help support and advance Palestinian economic development.” 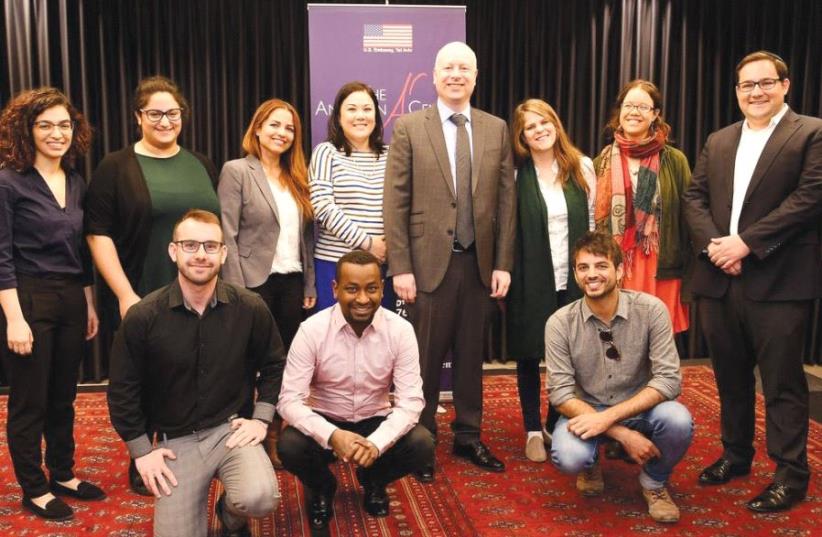 US ENVOY Jason Greenblatt (center) poses with Israeli students in Jerusalem after a meeting to discuss their views and perspectives on the future.
(photo credit: TWITTER)
Advertisement
Israel and the United States moved closer to creating a joint policy on settlement construction Thursday as right-wing politicians pressured Prime Minister Benjamin Netanyahu not to freeze such building.Netanyahu and US envoy Jason Greenblatt discussed the issue during a three-hour meeting in Jerusalem.According to a joint statement released after the meeting, the two men “made progress on the issue of Israeli settlement construction” and “discussed concrete measures that could help support and advance Palestinian economic development.”
Trump"s envoy Jason Greenblatt meets Netanyahu (credit: REUTERS)
It was the second meeting between the two men during Greenblatt’s four-day visit to Israel and the Palestinian territories.Greenblatt is in the region speaking with Israeli, Palestinian and Jordanian leadership ahead of an anticipated US push for a regional peace deal to resolve the Israeli-Palestinian conflict.According to the joint statement, Thursday’s meeting was “positive” and dealt with “the shared interest of the United States and Israel in advancing a genuine and lasting peace between Israel and the Palestinians that strengthens the security of Israel.”Earlier in the day, Netanyahu told the cabinet that part of this process was “an agreed-upon policy regarding settlement construction. Agreed-upon for us, of course, not just for the American side.“Naturally, this will be good for the State of Israel since we have not been in these processes for many years,” Netanyahu said.He has not made any details of the discussion public, but did tell the cabinet that he planned to keep his promise to the 40 Amona families to create a new settlement.“To the residents of Amona, I reiterate: I gave you a promise to build a new community and I will honor that commitment.”It’s a statement he has made numerous times since the Amona outpost was destroyed in February. Still, he has not placed the issue on the cabinet’s agenda for the necessary vote to legalize what would be the first new settlement in 25 years.Concurrent with Greenblatt’s visit, Samaria Regional Council head Yossi Dagan spoke with Likud ministers and warned them about the political consequences of any possible settlement freeze.It’s believed that Netanyahu has proposed to the US that Israel be allowed to build in the settlement blocs — including Gush Etzion, Ariel, Ma’aleh Adumim and Modi’in Illit – while freezing construction in the isolated settlements beyond the security barrier.US President Donald Trump already has publicly said he wants Israel to constrain settlement activity.In an unusual move, Greenblatt met Wednesday with settler leaders Dagan and Efrat Council head Oded Revivi, who is the chief foreign envoy for the Council of Jewish Communities of Judea and Samaria.“We respect Trump and the new government. We’re please there is a supportive government [in Washington],” Dagan said afterward.“Our requests are to our government and to our ministers. We must make a drastic change and stop these edicts [against settlement activity] that harm the basic rights” of the residents of Judea and Samaria, he said.Setters would like to see unrestrained building and have called on Netanyahu to annex Judea and Samaria, starting with the Ma’aleh Adumim settlement.The last US peace initiative under former US President Barack Obama broke down in April 2014. Palestinians have insisted that talks cannot be renewed unless Israel halts all West Bank settlement activity and Jewish building in east Jerusalem. Israel, in turn, has called for a renewal of direct talks without preconditions.During Greenblatt’s visit he met with Palestinian Authority President Mahmoud Abbas, as well as a broad cross section of Israelis and Palestinians including politicians, civic society members, Gaza residents, religious leaders and students. On Wednesday, he traveled to Jordan to meet with King Abdullah.He issued a series of tweets, some fairly personal, that spoke of his visit to Yeshivat Hakotel and of the evening prayer service the Prime Minister’s Office held for him so he could say the mourner’s kaddish for his mother.“I was extremely fortunate to meet some incredible Israelis and Palestinians on my trip. Thank you all for your perspectives!” he wrote.On Wednesday night, he tweeted: “Peace and coexistence are not just possible in this extraordinary city [Jerusalem], they exist already and have for centuries!” On Wednesday, senior Fatah official Jabril Rijoub told The Jerusalem Post that the Palestinians remain committed to a two-state solution at the pre-1967 lines.Rajoub called the settlements a “malignant cancer” and an “existential threat” for Israel. The starting point for talks must be a settlement freeze, he stressed.