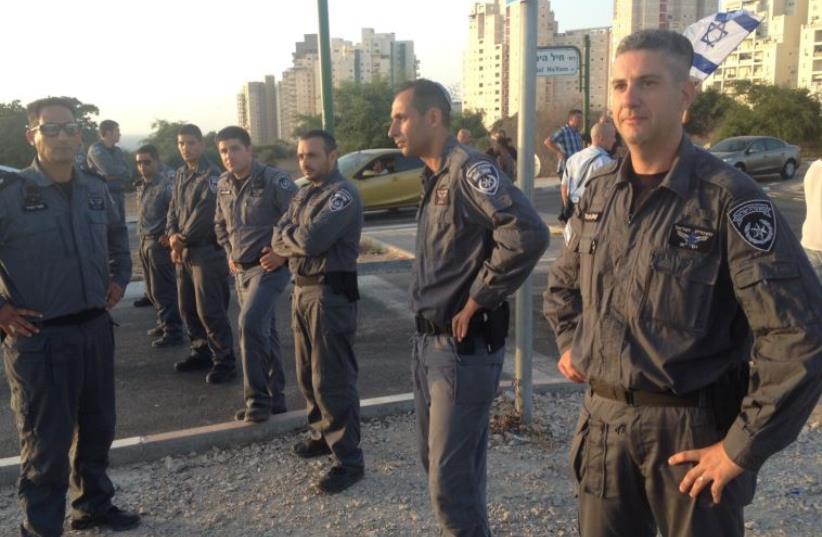 Police on guard in Ashkelon, August 16, 2016
(photo credit: POLICE SPOKESPERSON'S UNIT)
Advertisement
Some 200 people were protesting Sunday outside Barzilai Medical Center in Ashkelon where Muhammad Allan, the Palestinian prisoner who is currently in the 63rd day of a hunger strike, is in critical condition.Police forces were on the scene keeping protesters who support Allan and those against him from clashing with one another. The protests were taking place without a permit.Five people were arrested outside of the hospital, including a minor suspected of an attempt to disturb the peace who was holding a stone in his hand.The protests shifted to Ashkelon Junction at the entrance to the city after police decided not to allow protesters to reach Barzilai hospital.Dozens of protesters blocked the entrance to the city and were throwing stones at police forces and some were also using pepper spray, police said.  Police were making arrests and using riot dispersal means on the protest.  Doctors at Barzilai said on Sunday that they were working to save Allan's life, the Islamic Jihad operative who has declared a hunger strike that is now in its third month.Allan, an Islamic Jihad operative, is on a hunger strike in protest of his being held in administrative detention without trial. He lost consciousness on Friday morning and has been in danger of dying ever since.The armed wing of Islamic Jihad, the Gazan terrorist outfit, warned on Friday that if Allan dies, the group will resume rocket attacks in the South.Barzilai's director was quoted by Israel Radio as saying on Sunday that Allan has been taken off coma-inducing medication and is now being administered intravenous fluids and minerals. A right-wing minister told Channel 10 on Sunday that Israel mustn't capitulate to Allan.Ze'ev Elkin, the minister of immigration and absorption, told Channel 10 on Sunday that Israel cannot accept his demands to be released from administrative detention."The State of Israel can't allow itself to be held hostage to hunger strikes by prisoners because today it's one prisoner and tomorrow it will be others," Elkin said. "Today it's a prisoner in administrative detention and tomorrow it will be someone who was sentenced to jail after a fair trial.""That is why the state passed legislation [mandating the force-feeding of hunger-striking prisoners] and it needs to be implemented," Elkin said.