"These are extremely troubling instances of a grotesque but nevertheless very real – and murderous – incitement," says ambassador to Sweden. 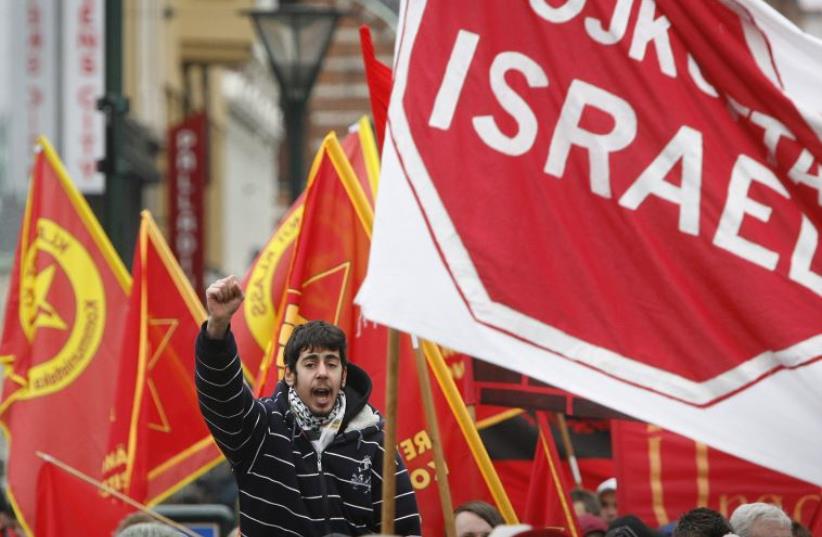 A protester chants slogans near a banner reading "Boycott Israel" during an anti-Israel march in Malmo
(photo credit: REUTERS)
Advertisement
Hundreds of protesters in the Swedish city of Malmo were filmed chanting in Arabic about slaughtering Jews and stabbing soldiers.Pro-Palestinian groups organized a rally Monday in the city center against what they consider Israeli violence and to show solidarity with Palestinians amid deadly measures taken by Israeli authorities to stop the recent spate of attacks on Jews in Israel and the West Bank.Isaac Bachman, Israel’s ambassador to Sweden, posted on his Facebook account a video taken at the rally showing hundreds chanting “’slaughter the Jews, stab soldiers.” In other slogans, the chanters encouraged “heroes to carry out attack after attack” and to “start a third intifada.”"These are extremely troubling instances of a grotesque but nevertheless very real – and murderous – incitement which must be dealt with by the full force of the law,” Bachman wrote.His wife, Osnat, wrote about the video: “Swedish people: Is this what you believe in? Is this what you bargained for? Are these your morals? Since I know the answers I feel ashamed in your name.”Separately, the Scandinavian airline SAS recently announced  that it would stop flights from Copenhagen to Tel Aviv at the end of March, along with Ankara and Russia, citing profitability issues.SAS spokeswoman Trine Kromann denied claims made in the Israeli media that the line was profitable — the Israel Hayom daily reported Tuesday that the line had seen a 41 percent increase in traffic in 2014 over 2013 — and denied that the decision to stop the flights to Israel was in fact politically motivated.Kromann said SAS did not share or discuss traffic statistics, “which in any case are only a part of the commercial calculation for determining profitability.” She added: “We also look at, for example, the price we can get per ticket and operating costs.”The line to Tel Aviv is a particularly costly one for SAS, Kromann added.