The prisoners are demanding that the Israel Prison Service end detention without trial and solitary confinement, increase visitation rights, and improve amenities. 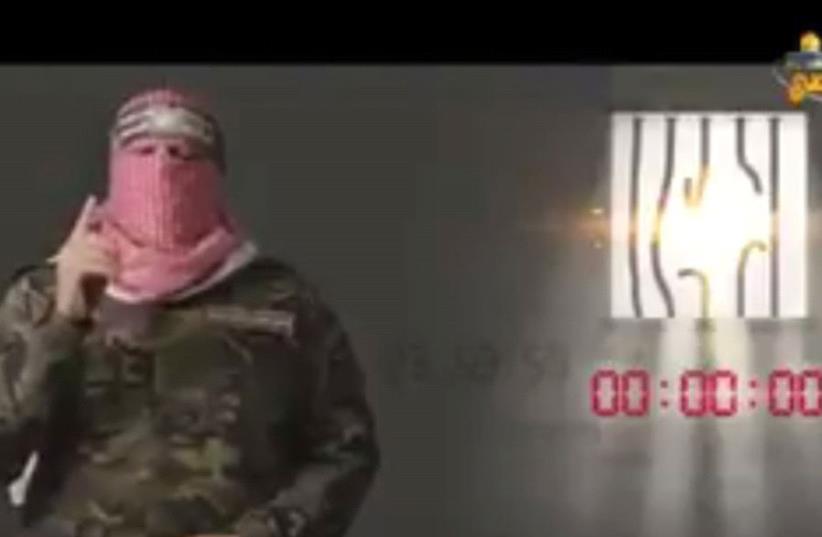 Hamas issues ultimatum over hunger-striking prisoners
(photo credit: screenshot)
Advertisement
Israel has 24-hours to respond affirmatively to the demands of hunger-striking prisoners in Israeli jails, Abu Obeida, spokesman of Hamas' armed wing said on Tuesday. “We are setting a 24-hour deadline for the enemy’s leadership to comply with the prisoners’ demands,” Abu Obeida said in a video posted on Hamas-affiliated news outlets.Abu Obeida said that Hamas' armed wing, known as the Izzadin Kassam Brigade, will increase the number of prisoners it is demanding Israel release in prisoner swaps talks for every day Israel does not comply.Hamas and Israel are reportedly partaking in indirect prisoner swap talks. Israel would like Hamas to set free three Israelis and return the bodies of two deceased IDF soldiers, while Hamas would like Israel to release Palestinian prisoners.Abu Obeida’s comments coincided with the 16th day of a mass hunger strike in which some 1000 prisoners are participating.The vast majority of the hunger-striking prisoners are affiliated with Fatah, whereas a small number belong to Hamas.The prisoners are demanding that the Israel Prison Service end detention without trial and solitary confinement, increase visitation rights, and improve amenities. The IPS holds that it operates in accordance with international law. Meanwhile, Hezbollah Chief Hassan Nasrallah said in a televised speech on Tuesday that the Arab world and international community have not done enough for the hunger-striking prisoners.“Where are the Arab people, the Arab League, the Organization of Islamic Cooperation? Where is the world, Europe, the west, the United Nations?” Nasrallah asked. A major protest in support of the hunger-striking prisoners is slated to take place in Ramallah on Wednesday at 5PM in Nelson Mandela Square, a couple of hours before Palestinian Authority President Mahmoud Abbas and US President Donald Trump will meet in Washington, D.C.Abbas told members of the Palestinian diaspora in the US on Tuesday that he supports the hunger-strikers’ demands. “I say to the prisoner be patient. Be patient as the Yasser family was patient. Victory is your destiny,” Abbas said.